Excelsior Restaurant – The King Crab and I

In the immortal words of Stan Lee, “Excelsior!”  Note: for all of you non-nerds, Stan Lee is an icon in Marvel comics and uses the word “Excelsior” as his catchphrase.

It may be the end of April, but you can still find Alaskan King Crab in Vancouver (although the prices are a wee bit higher).  Someone had recommended Excelsior as THE place to get king crab.  Since we didn’t get it last week at Western Lake Chinese Seafood Restaurant we decided to try it out for lunch.

We made reservations and were escorted to the private room in the back of the restaurant.  I think they must use this as a storage room / mj room when it’s not too busy. 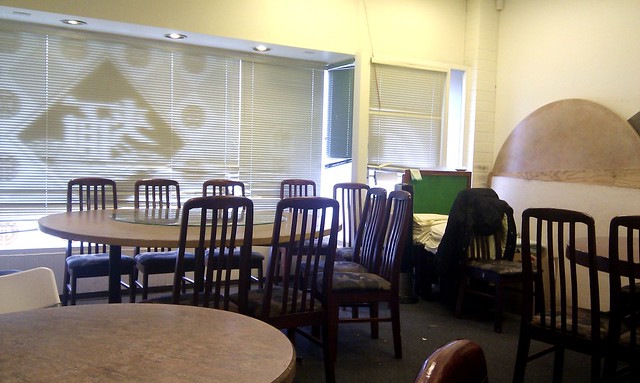 Yes, if you look closely, you can see the mj table in the corner of the room.  Our  dinner table was huge and easily seat more than 12 people comfortably.  Unfortunately, they had a regular sized lazy susan which meant that you still had to stand up to reach the food sometimes. 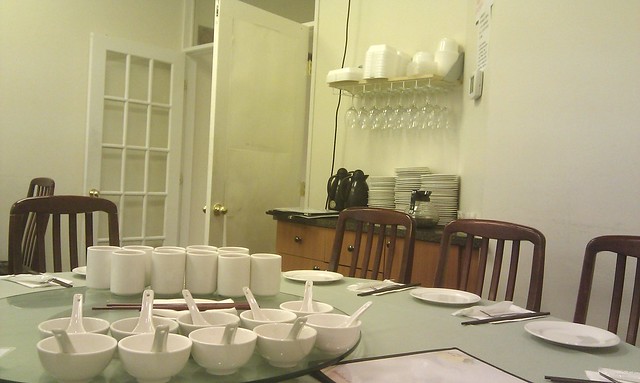 The good thing about the private room is that we were the only ones there (it wasn’t too busy in the regular restaurant during lunch).  We didn’t have to worry too much about the kiddies making too much noise.  It kind of felt like we were eating in a secret room.

The bad thing is that they kind of forget about you in the back room.  We did have one nice waitress, but it was pretty much self-service in between when they brought the food in.  As you can see in the above picture, there was a small serving station next to us so we helped ourselves to new plates, tea, take-out containers, etc…  We even put away some of our own dirty dishes!

The great thing about Excelsior is that they serve king crab in a lot of different ways.  We had 5 different styles with our 10 lb king crab. 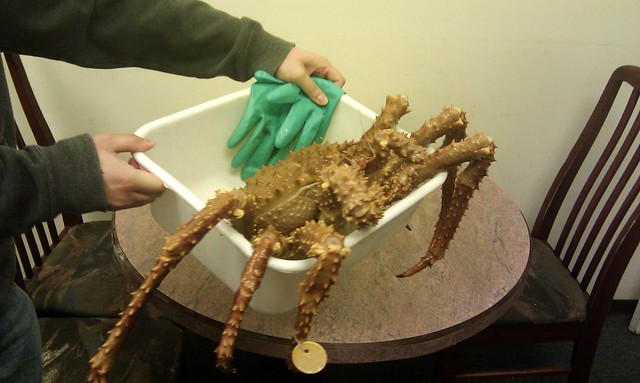 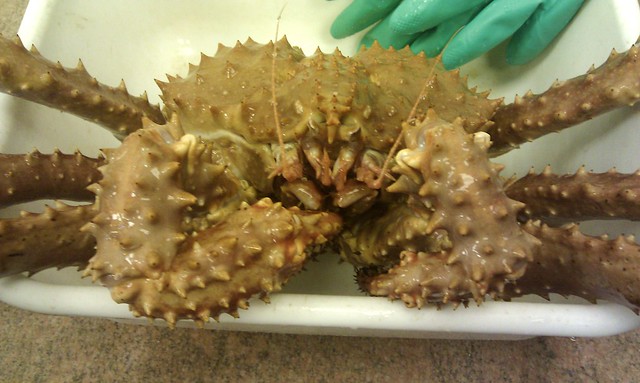 The first thing that came out was the complimentary soup.  It’s the kind of soup that you’d find in any Chinese home… simple ingredients like chicken feet and ginger but still good. 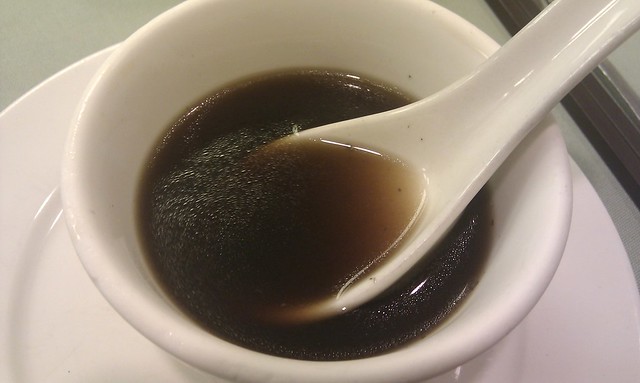 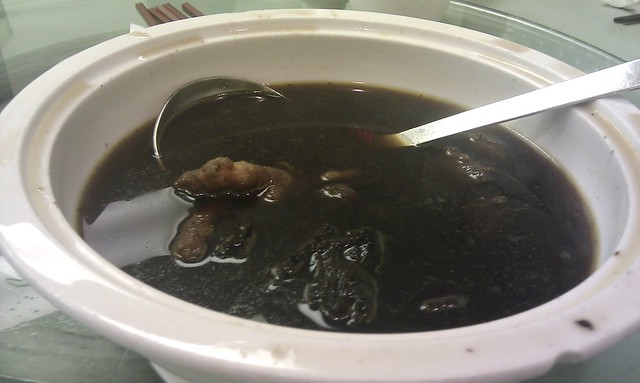 We were originally planning on having the black cod with black bean sauce but they said they were out.  Instead, we went with the waitress’s suggestion for a two course fish dish.  The first dish was fish fillets served on gai lan.  The fillets were actually really good. 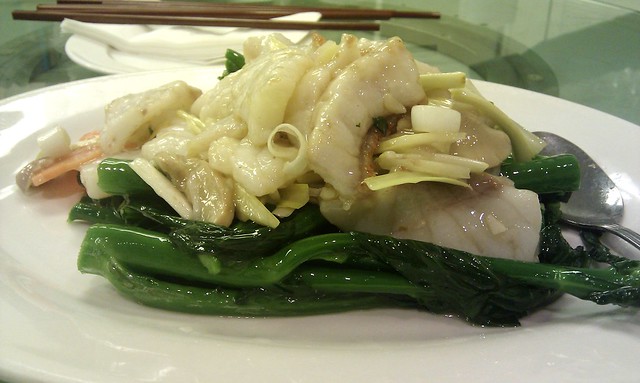 The second fish dish (which came out later) wasn’t as good.  Lots of bones so I didn’t really taste much fish here. 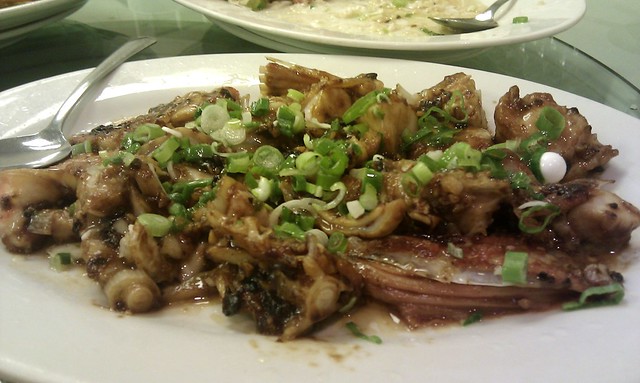 Now, getting back to the king crab, the legs came prepared two ways…  First with ginger and scallions. 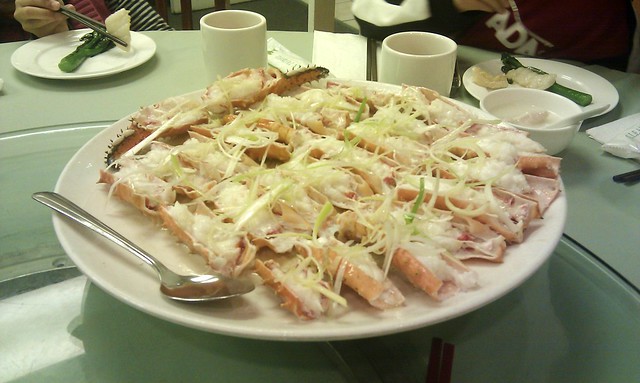 At first, we weren’t sure about this because we had always had the steamed legs with garlic before.  But everyone agreed that this was very good. 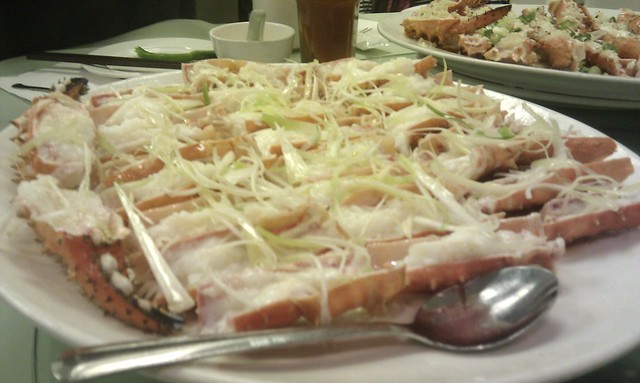 The great thing is that we didn’t have to decide because we also got the steamed crab legs with garlic. 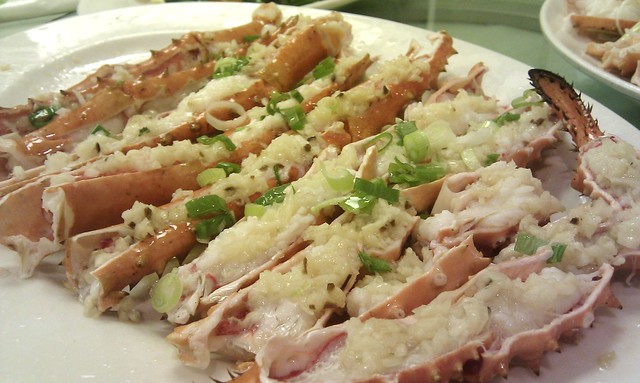 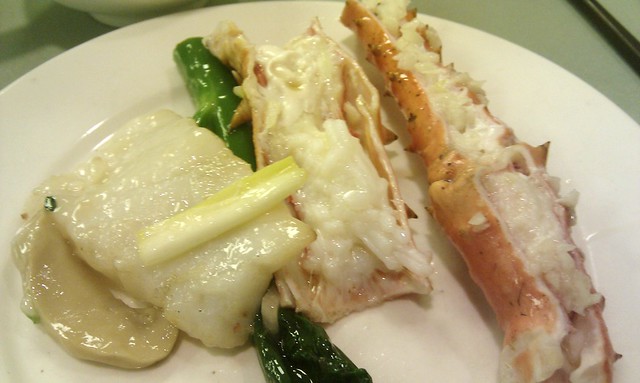 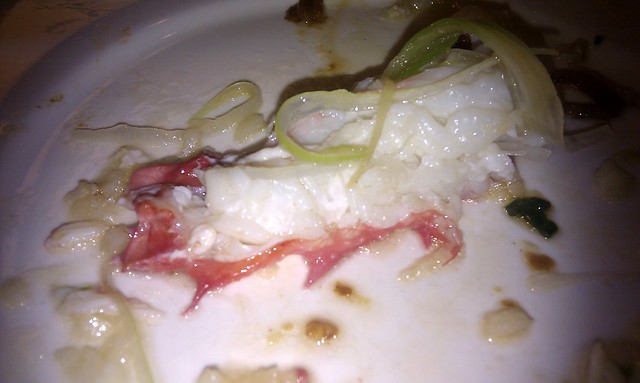 The next style of king crab that we got was the deep fried knuckles in house sauce.  The dish was huge.  Even though we only had a 10 lb crab, it seemed to be a bigger dish than the one we had at Sun Sui Wah where we had a larger crab! 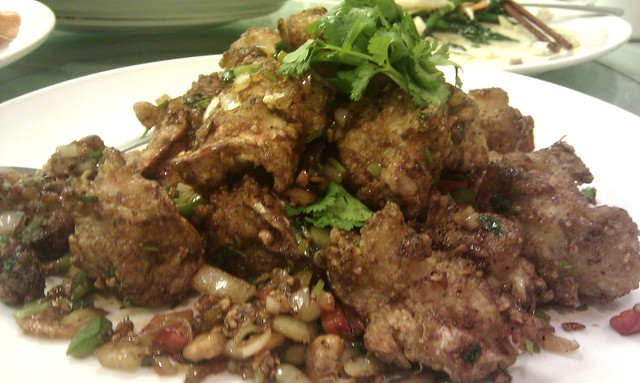 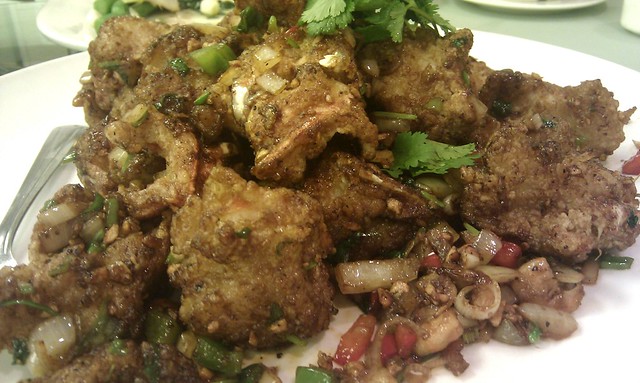 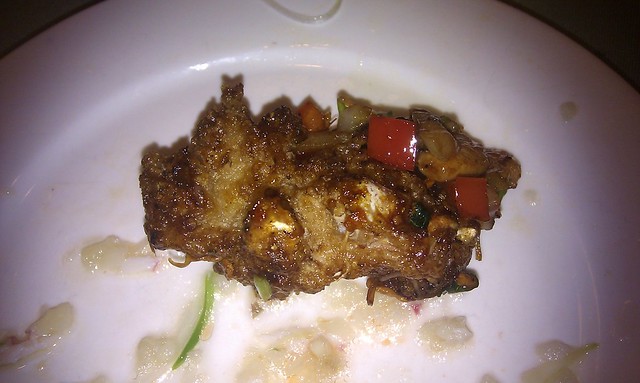 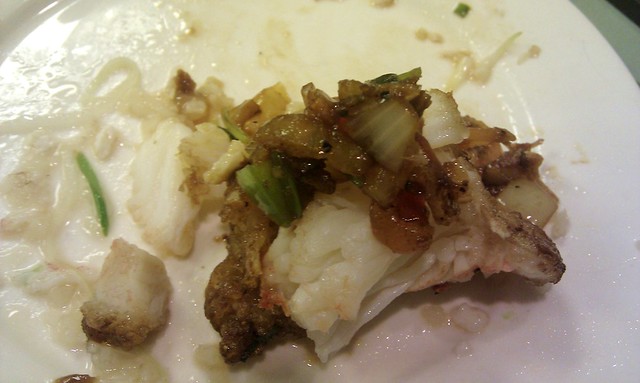 While we were waiting for our next king crab dishes, our spicy chicken wings and pea shoots came. 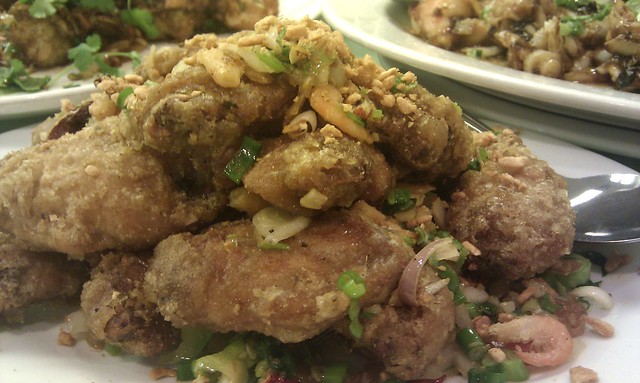 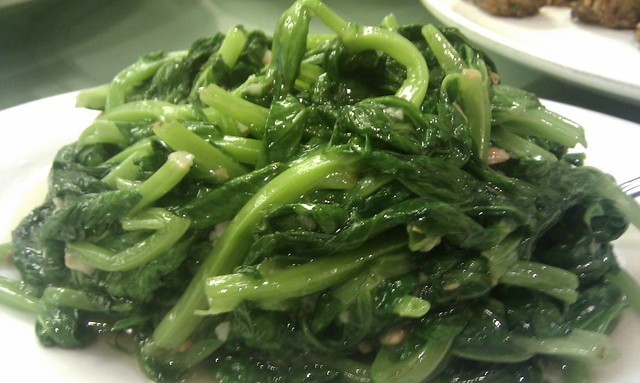 The pea shoots came in handy later on because I made the mistake of eating several hot chilis from the chicken wing dish.  I generally don’t notice spicy food too much (think I burnt out my taste buds when I was young).  I can usually eat chilis, jalepenos, etc… without feeling any heat.  Even habanero sauce doesn’t do much to me.  But for some reason, I could really feel the burn on the back of my tongue this time.

The fourth style of king crab that we had was the baked fried rice in the king crab shell with portuguese sauce.  This was the dish that I was really interested in trying after seeing many other people have this at other restaurants. 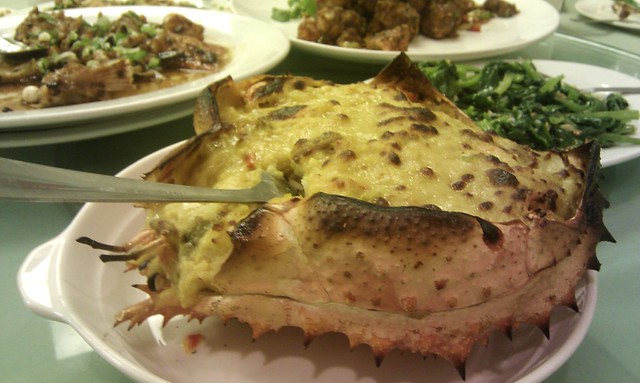 While it’s nothing really special, it was kind of neat and was tasty.  I think there were actual pieces of king crab in the fried rice but I’m not sure where it came from.

Our last king crab dish was a simple pan fried lo mein noodle (the same used in wonton noodle soup) dish that was served with the left over juices from the steamed king crab leg dishes.  Leave it to us ingenious Chinese people to make use of every last drop of the king crab.  Some people might just say “WTF!” but I actually liked the noodles.  After having all of the other dishes, it was nice to have something simple like this. 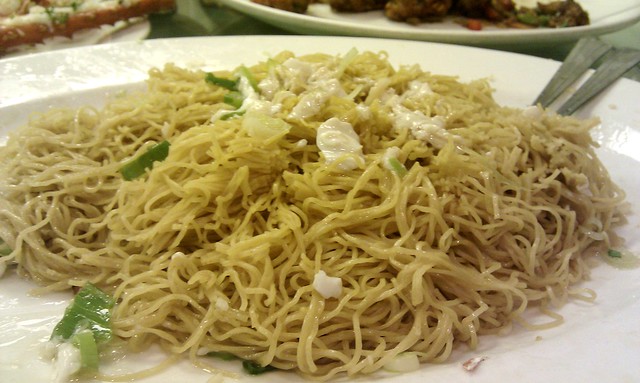 Bottom line, was it the best Alaskan King Crab we ever had?  Not sure, but it was very tasty and I was glad we tried it out.  If you’re looking for king crab served in a lot of different ways, this is definately the place to go.

When we finally left, I couldn’t help but notice that all of the tables in the regular dining room had some type of curry dish… might want to try this out sometime in the future.

If you’re not stuffed from all of the king crab, you should check out New Town Bakery a few doors down and pick up some apple tarts!