Kinemi’s Kitchen is located in the Crescent of Champlain  Heights.  There is a serious lack of restaurants in the immediate area with the closest take-out usually either at Champlain Mall, Kingsway, or the Metrotown area.  Unfortunately, a lot of the restaurants either don’t stay very long or move to other locations.

Previously, this particular location was the site of a number of different pizza restaurants.  While walking past the area last week, I noticed that a new restaurant had just opened up.  As a matter of fact, their grand opening isn’t until tomorrow.

I read the reviews on Urbanspoon and noticed that they were all raving about the place.  I was a little suspicious since they were all done around the same time and the reviews sounded very similar but I figured that I should give it a shot since we have to stay loyal to our local neighbourhood restaurants.

The restaurant itself is geared more for take-out business as the interior is fairly small.  I think there was a box of herbs drying on one of the dining tables.

The first thing  you should know is that the take-out menu does not list all of their dishes.  When I called in, they listed off about half a dozen specials that weren’t listed on the menu (and apparently, the specials change often).

I decided to try the baked lasagna since you can usually tell a lot about a pasta place by their lasanga. 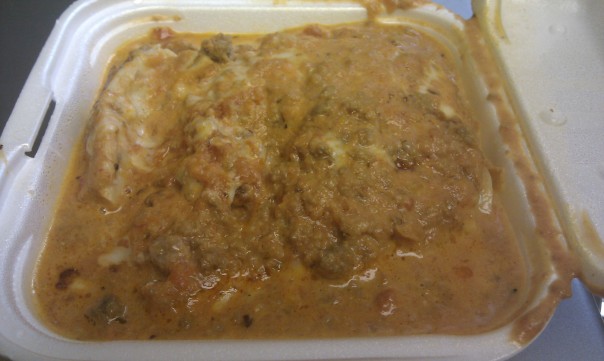 The first thing that I noticed was that this was not like other baked lasagnas that I’ve had elsewhere.  I’m used to having the lasagna actually baked in the tin foil dish.  This was more creamy and saucy than I would prefer (as you can see in the take-out container, it was swimming in sauce).  Some people probably like this.  It’s more like the kind of lasagna that someone would make at home. 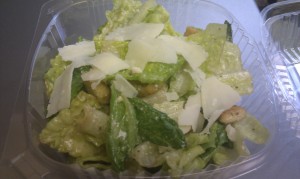 Their Caesar salad was nothing spectacular but it was fine for take-out fare.  I did notice that some of  the lettuce pieces looked a bit wilted… not sure if that was because it was pre-made and sitting out too long or if it was because the lettuce wasn’t the freshest.

I also decided to try one of their specials, the linguine with king mushrooms and truffle oil. 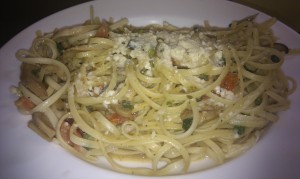 I actually liked the linguine.  I honestly couldn’t tell the difference between king mushrooms and regular mushrooms but they do sound a bit exotic.  Also, I really couldn’t tell what made the truffle oil different than olive oil but I understand that it’s supposed to go well with mushrooms.

In summary, I’m still a bit suspicious about the other reviews.  The food was okay and I would probably order take-out in the future but nothing really spectacular.  Gotta try their pizza next time and see how that’s like.