Well, we got snubbed for the Will and Kate wedding invitation so we decided to dine out at Kingsway Sushi and drown our sorrows in all-you-can-eat Japanese food.  For some reason, Japanese food lends itself very friendly to AYCE (probably since a lot of the items can be made into bite-sized portions).  But more importantly, you can also eat more since there is a good variety of dishes (unlike East Indian AYCE places like New India Buffet).

Of course, one of the major problems with AYCE places is that you get what you pay for.  Sure, when new AYCE joints open up, they’re usually really good (clean, cheap, variety of dishes).  But ultimately, as time goes by, things go downhill, prices creep up, and they cut back on the number of dishes that’s available.

On of the things I like about Kingsway Sushi is that they still have a good variety of dishes (albeit rather on the pricey side).  The other thing I liked was that we got a seat next to the window that looked out onto Boundary Road.  It was almost like we were dining in Buckingham Palace and looking down at all the little peons below.

Since this is an AYCE place, I’ll do the ratings a little different for this post and try to rate each dish.  Hopefully, this is more useful for you because there’s nothing worse at an AYCE place than to order stuff that you don’t like.

We went with the Deluxe Dinner which was just under $30 each. 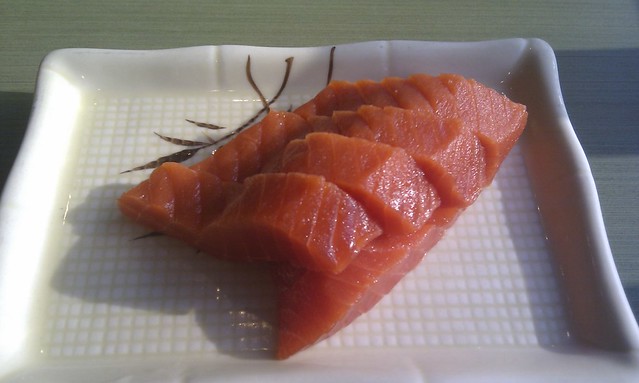 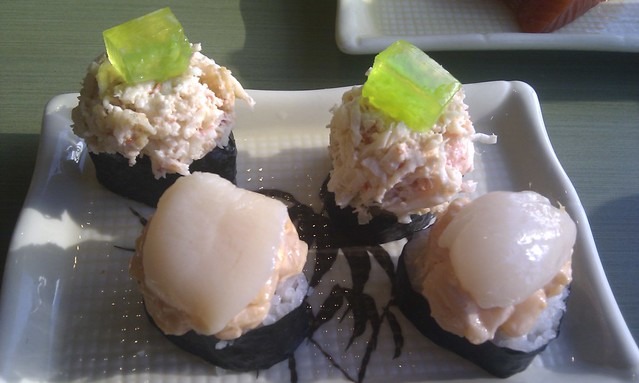 The lobster “sundae” was pretty good and looked really neat (4 / 5).  It’s basically a round sushi roll made of rice topped with “lobster” and garnished with a piece of green jello.  I wasn’t sure if it was real lobster or not but it tasted pretty good.  The scallop “sundae” was a little odd (3 / 5).  I think I was thrown by the different texture and temperature between the chopped scallop and the whole scallop that was on the top. 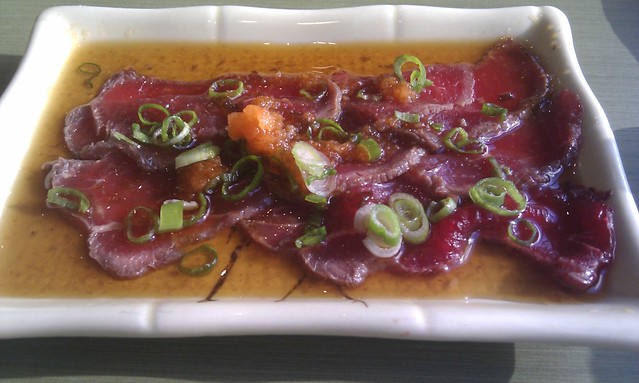 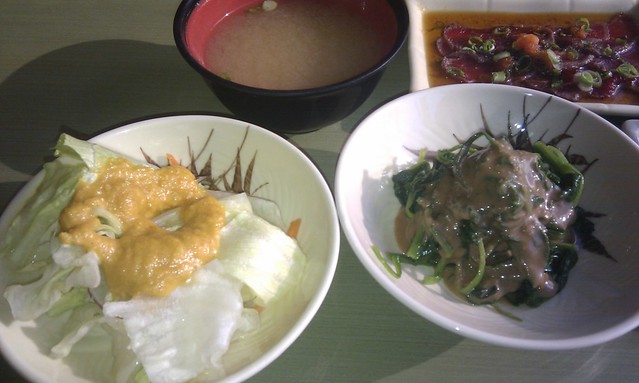 The beef tataki was shaved nice and thin (4 / 5).  Many times, I’ve had beef tataki that was too thick and tasted tough.  The miso soup (2.5 / 5) was just okay.  I suppose it’s unfair to compare it to ones at regular Japanese restaurants but since this is my blog, it’s my perogative.  The spinach gomae was good (4 / 5) as was the green salad (4 / 5).  It’s always good to get some veggies at AYCE to help break up the monotony of the fried dishes. 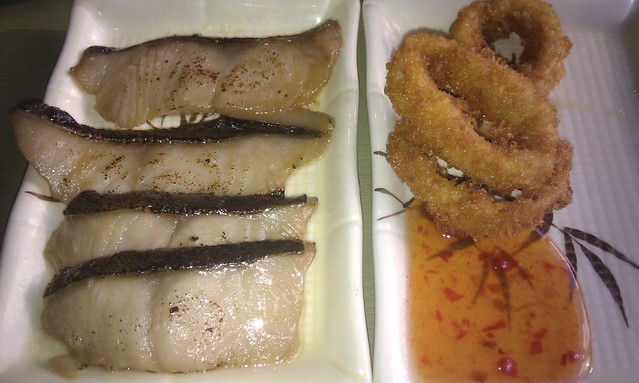 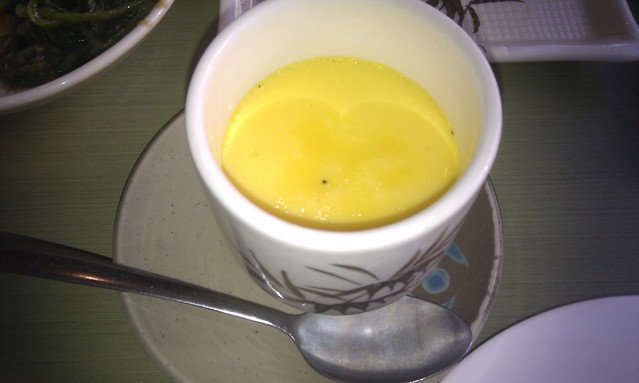 We liked the sliced black cod (3.5 / 5) although I did get some pieces with bones.  Ika karaage (basically calamari) was nice and crispy (4.5 / 5) and went well with the sauce.  I wasn’t a big fan of the chawanmushi (2 / 5) which is basically an egg custard dish with pieces of shrimp and edanami beans buried underneath.  I kept thinking I was eating a strange egg tart (without the nice flaky crust). 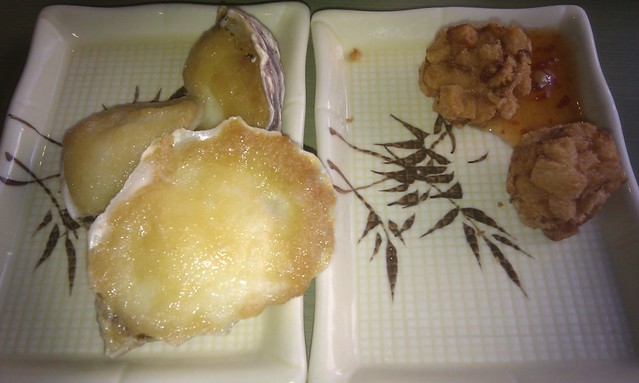 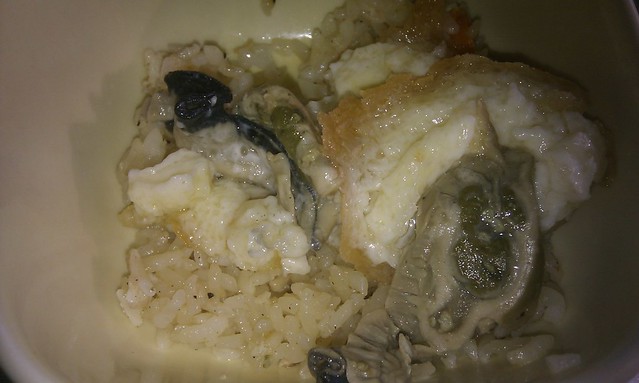 Many AYCE places aren’t serving their oyster motoyaki in the shells anymore… something to do with hygeine I think.  But if you’re eating at an AYCE place, you kind of think that hygeine isn’t necessarily the  highest on your priority list.  The oyster motoyaki wasn’t great (2 / 5).  They only had small slivers of oyster in them.  On the other hand, the deep fried shrimp bombs (3.5 / 5) were tasty (and looked neat the way they were puffed up). 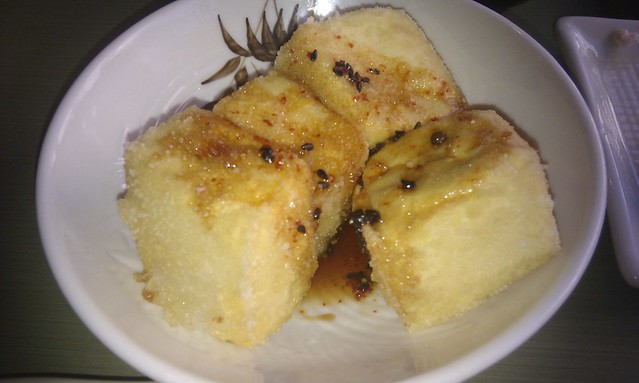 The spicy tofu had big pieces of tofu and was pretty good… not soggy (4 / 5).  I wouldn’t say that it was very spicy though. 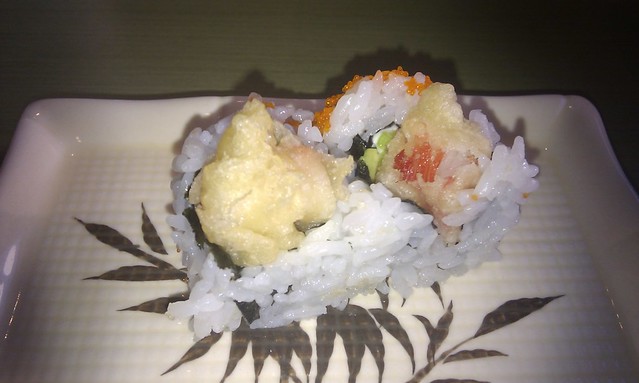 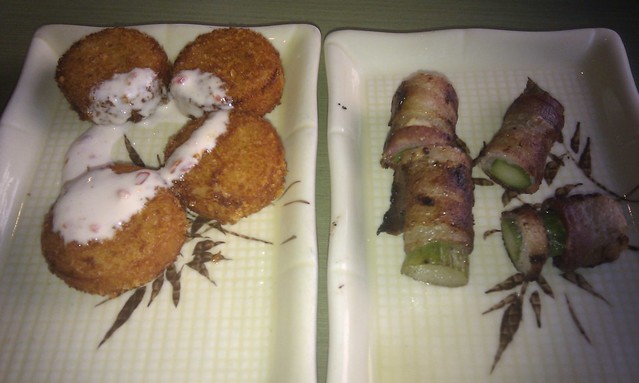 The cheezy sushi (not what you would think) was actually deep fried crab stick and didn’t have much flavor (2 / 5).  On the other hand, the deep fried scallop was good (4 / 5).  Unfortunately, it’s difficult to eat a lot of these because it’s deep fried.  The bacon wrapped asparagus wasn’t bad (3 / 5) but the asparagus wasn’t as “snappy” as I would have preferred. 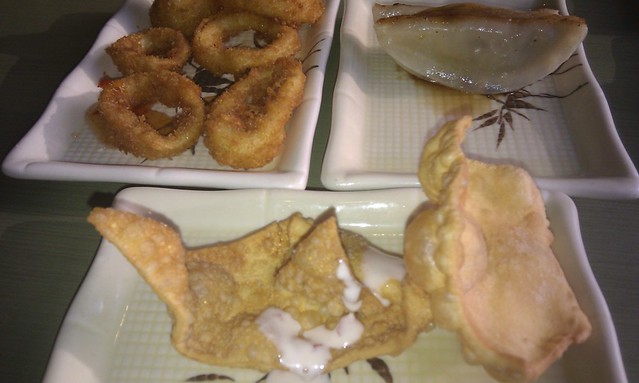 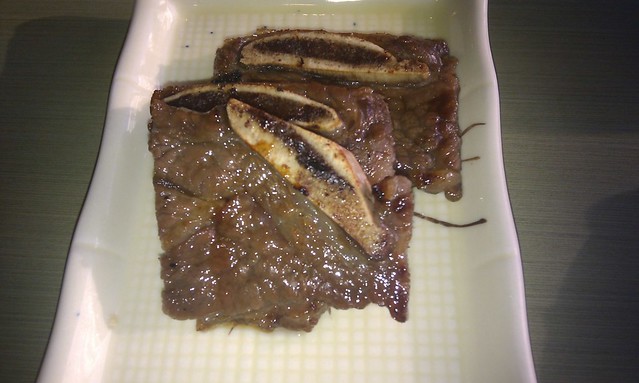 The gyoza was just okay (2.5 / 5)… the skin was a little tough and not as juicy as some places.  What ever you do, don’t bother ordering the deep fried wontons (0 / 5).  It was a thick piece of fried dough with a sliver of “something” on it.  Definately not worth the table space.  The beef short ribs were too thickly cut in my opinion (2.5 / 5) which made them tougher to chew through.  The taste itself wasn’t bad and it might have been better if it was thinner. 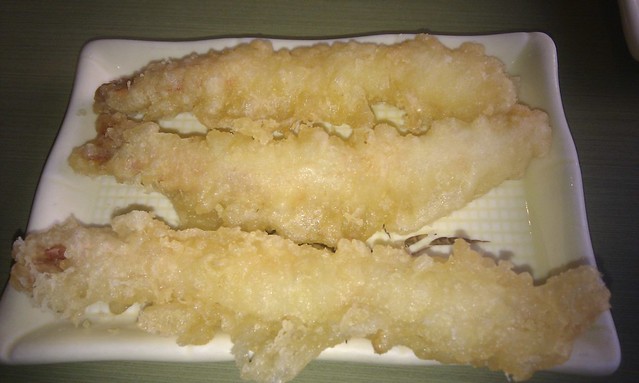 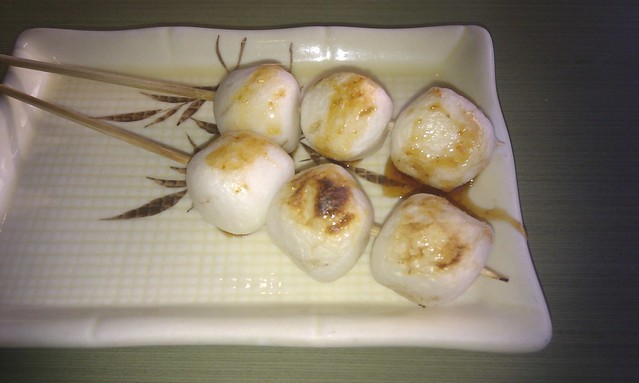 The prawn tempura (2.5 / 5) would have been better if they had actually given us some tempura dipping sauce.  As it was, the tempura was a little too thick and we had to peel off most of the tempura.  No, those aren’t mashmallows on a skewer… they’re fish balls (3.5 / 5). 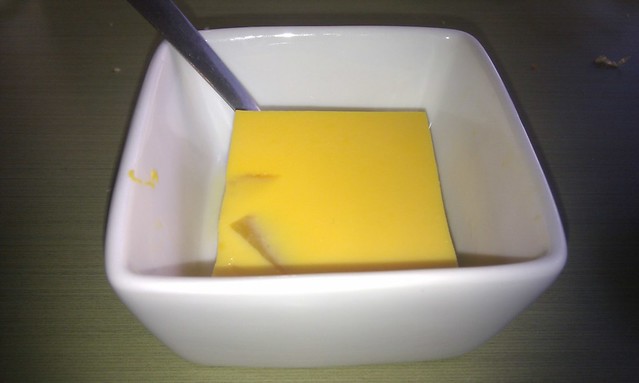 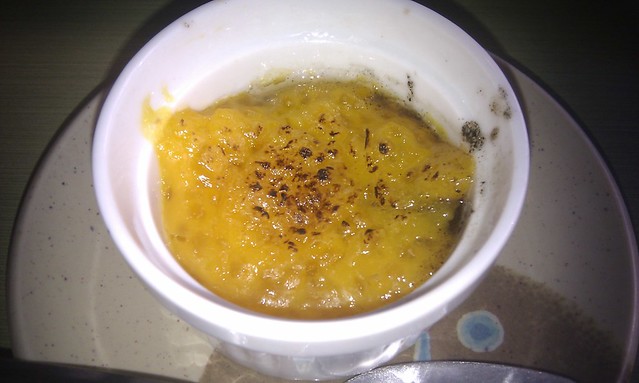 The desserts were pretty good.  Normally, you don’t get much more than just oranges or jello.  The mango pudding (4 / 5) was good.  And we did like the baked tapioca pudding (4.5 / 5) but it was rather on the small size.  While the menu says that there was a 10 minute prep time required for the tapioca, it came out right away so I’m guessing they already had them pre-made.

Now, if we’re going to talk about the restaurant as a whole… I’ll just sum it up as follows… it’s an AYCE place… what were you expecting?  My tea cup had a small piece of tobiko on it but I guess that’s just par for the course.  The servers were nice enough and came to fill our tea quite often.