After the utter failure I experienced at Wally’s Burgers, I still needed to satisfy my fix for a burger so I stopped by Dairy Queen.  It’s a little surprising how a little sunshine in Vancouver will drive everyone to go get ice cream as the parking lot was packed when I got there.

I seem to have been having a difficult time finding good food/service today and Dairy Queen was unfortunately not any different.  Don’t get me wrong, I’ve been to this particular Dairy Queen a number of times in the past and they’re usually pretty good.

This was supposed to be the crispy chicken salad with honey mustard dressing… notice the lack of honey mustard dressing – that’s because they forgot to give us the dressing.  I suppose that it’s partly my fault… I should have checked before I left the place.  I’m not certain if the honey mustard dressing would have helped but I’ll never know now.  We wound up using some salad dressing we had lying in the fridge.  The thing I did notice was that the salad was oddly salty.  I think it might have been the bacon that made it too salty.

The onion rings were okay… I prefer the ones at A&W but these weren’t that bad.  The burger I chose was the 1/2 lb flamethrower burger.  It wasn’t overly spicy but it did have a bit of a kick to it.

It was filling too (with double patties, cheese, bacon lettuce and cheese). 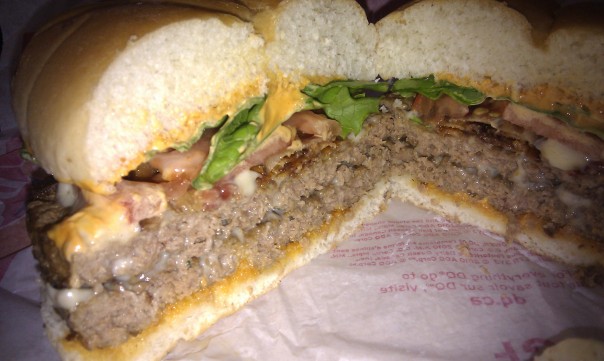 If they didn’t forget the salad dressing, the service probably would have been better.