The Powell Street Festival is celebrating it’s 35th year this weekend at Oppenheimer Park and celebrates the Japanese Canadian arts, culture, heritage, and more importantly… has a number of great food stands.

There are three things that we usually go for when we hit the Powell Street Festival:  takoyaki, sushi cones, and sweet corn on the cob.  Unfortunately, this year has been a bit of a let down… the takoyaki has been replaced by Osaka balls and there were no sushi cones.

The festival opens at 11:30am so if you plan to go… line up first for the Osaka balls – similar to takoyaki but they replace the octopus with shrimp and scallop pieces.  This was the line up to the Osaka balls stand – it’s always a pretty long line and this time took us about 40-50 minutes to get to the front of the line.

We didn’t know that the takoyaki had been replaced by Osaka balls until we got to the front of the line.

That’s not to say they were bad… they were actually quite good… but when you’re craving octopus,  it’s just not the same.

You get 7 Osaka balls for $5 and it comes with bonito flakes on top.

There’s lots of other food tents to choose from and most of them have big lineups.  Everything from bbq salmon and $3/piece spam sushi to gyoza, donburi, noodles, and tofu items from Sunrise Soya. 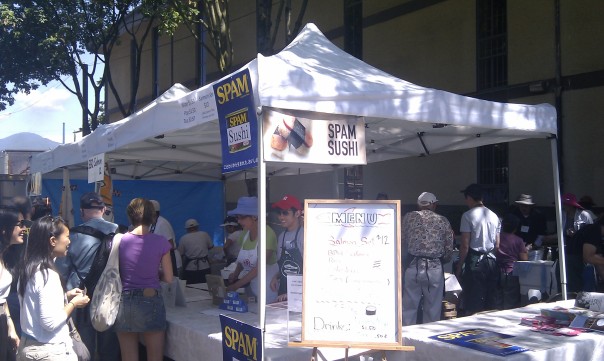 The Yakimochi was the closest thing I could find to a sushi cone but really wasn’t the same.  If you like mochi (Japanese glutinous rice cake) you’ll probably like this but I found it a little too chewy and sticky.

There’s also Imagawayaki (a cake stuffed with red bean paste).  These are good when they’re fresh. 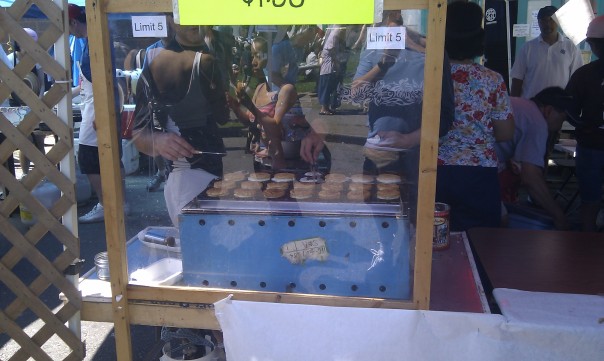 They kind of remind me of hotcakes on steroids. 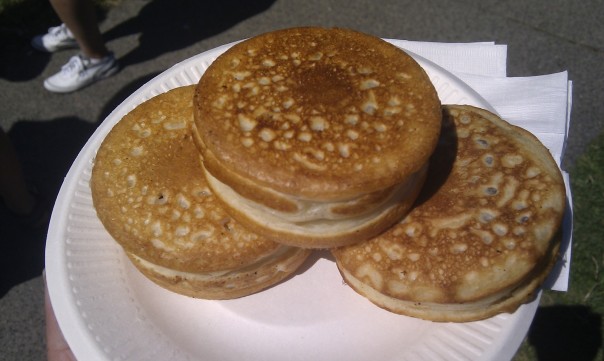 Fortunately, the corn from the Buddhist Society was still there and more than worth the trip down to Oppenheimer Park.

This is one of the best corn on the cob around and, oddly enough, one of the few food tents that didn’t have a long line up.

It was a hot one out today and check out the line up to the shaved ice stand. 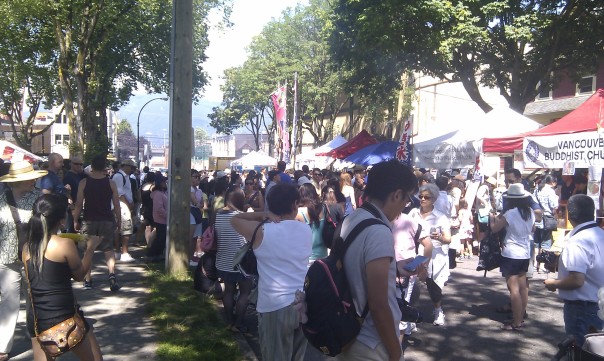 The Powell Street Festival only comes by once a year so make sure you head down for some great grub (oh yeah, and they have a bunch of vendor tents where you can buy stuff and a stage where they have various performances if you’re interested in things other than food).

If you were a bit disappointed that there was no temaki or takoyaki this year, take a look at our recent Powell Street Festival Redo at Sushi Oyama.