We’ve been going to the Pacific National Exhibition every year since we were kids.  Some things have changed over the years (I still miss the BC Pavilion with the Challenger Relief Map) but one thing that hasn’t changed is that the PNE is a great place to go to get yummy fair food.

Where else can you get Pennsylvania Dutch Funnel Cakes?  This stand also sells the deep fried oreos and pop tarts but the funnel cake is the real show stopper.

It’s fun watching them pour the batter into the hot oil and seeing it come out as a giant, golden brown basket.  Sprinkled with powdered sugar and topped with whipped cream and strawberries.  Make sure you get it early in the day so you can try to walk off all of those calories.

This year, it seemed really dead at the PNE for some reason.  Maybe it’s because the sun was finally out and everyone was at the beach, but there were only short lineups at the Show Home, small crowds at the Superdogs, and no one waiting for those mini donuts.

Usually, we have lunch at Jimmy’s… how can you resist the smell of those onions being cooked?  This year, we thought we’d try some other foods.  Hunky Bill’s has been around for years but we haven’t eaten there for a long time.

We picked the Ukrainian Dinner which comes with deep fried perogies, ukranian sausage, cabbabe roll, slice of bread and pickle for $12.

Every year, we make sure we see The Superdogs but I think the show’s been going downhill ever since Herb Williams retired.  While the show itself hasn’t changed much over the years, that’s not the real problem.  Herb always knew how to stir up a crowd and get everyone cheering.  Chase, on the other hand, sounded like he didn’t even want to be there.  We still like going just to see the cute doggies though.  Most years, the crowds are packed for the show but there were tons of empty seats this year. 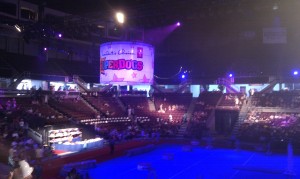 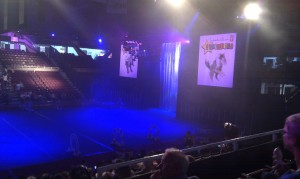 Dusted with powdered sugar and cinnamon, these soft little donuts disappeared in a matter of seconds.

While we saw the new Crazy Dog stand that served a 2 foot long hot dog, I couldn’t really justify spending $25 for a hot dog (or eating 2 feet of hot dog for that matter).  Instead, we went with the regular foot long hot dog with onions ($7).  For some reason, they use little packets for the ketchup, mustard, and relish… not very useful when you’re trying to cover a huge hot dog.

Whales Tails (no, not the ones caused by low-rise jeans) are delicious fried bread that has been hand-stretched in the shape of (you guessed it) whales tails.

We usually get the cinnamon and sugar topping (the same as those little mini donuts).

Fisher Fair Scones started 100 years ago down in Washington but this was the first year that we tried them.  Freshly baked and stuffed with butter and raspberry jam, these scones have a firm and crunchy crust and a soft interior.

Not as soft and fluffy as the ones we had at Afternoon Tea at the 900 West Lounge but still very tasty. 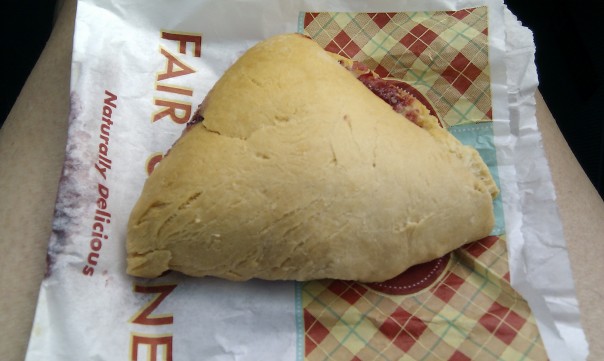 There were so many more things that we wanted to try… especially the deep fried blooming onion… too much food, too little time.