On our first visit to Rodney’s Oyster House, we missed out on trying their chowders and we knew that we definitely wanted to try them out on our next outing.

Of course, before we started with the chowders we wanted to try some more of their raw oysters so we asked our server to pick out a selection of oysters for us to try.  I’ve heard some people complain about the service at Rodney’s but we found the service to be great and our server was quite friendly.  He brought back some Kumamoto ($3.50), Stellar Bay ($3.50), and Glacier Bay ($2.50) oysters but I honestly couldn’t tell much difference between the different varieties because I was too busy tasting the different accompaniments and horseradish.

Oddly enough, my favourite sauces were the Shallot Vinaigrette and the Banana Pepper Vodka Vinegar sauces (probably two of the most different in terms of spiciness)

The chowders are pretty good serving sizes – 12 ounces – but we still wanted to try out 2 different ones.  The first was the Manhatten Clam Chowder.  Did I mention that they serve their chowder with oyster crackers?  I love oyster crackers but I’ve never found them in the grocery stores.  Does anyone know where you can go to buy these in Vancouver?

The Slapjack Chowder – I’m not sure why they call it “slapjack” other than the fact that it tastes to darn good that you want to slap your hand on the table à la the children’s card game under the same name and say “Wow!”  The chowder itself comes with poached oysters in a creamy potato leek soup base and was very yummy. 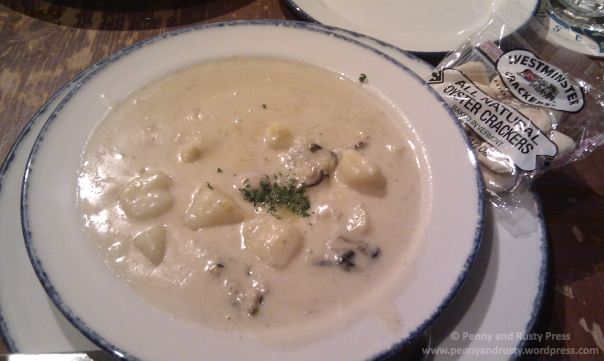 The daily special was an Atlantic Lobster and Shrimp Roll served on a toasted french bread with tarragon mayo – this was so good!  The bread was both perfectly crispy and soft and the creamy seafood filling was fresh and meaty.  We were starting to get full by this time (the chowders were really filling) and I thought about not eating the wedge-cut fries that came with the lobster roll but they were so good that we wound up finishing all of the fries too.

We really enjoyed the pan fried oysters the last time we were here so we ordered them again and were not disappointed by how fresh and juicy these were. 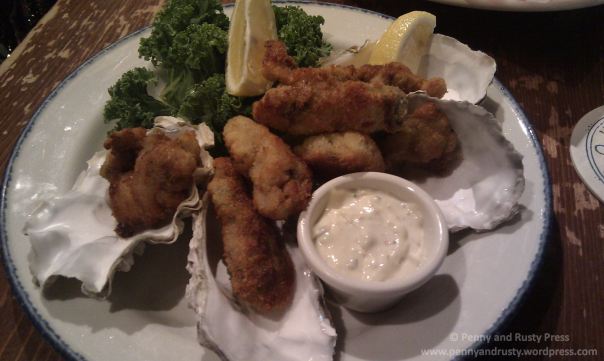 Rodney’s water re-filling came up to 2 refills within an hour (1 every 1/2 hour) which is pretty much par for course for what we would expect at a restaurant that provides good service.