Note:  Since this is a visit to Cockney Kings, I figured I’d try to write this entry in Cockney Slang.  The restaurant gives you a paper place setting with a bunch of common Cockney translations… please forgive me if this doesn’t translate well – but at least you have the pictures to look at.

My trouble and strife and I ‘ad sum Barney Rubble findin’ somewhere ter eat Present and Past saturday.  We tried ‘eadin’ ter wahn restaurant but found aahhht that they were closed for Kidney Punch on the weekends… the bastards!  After drivin’ ’round for a bit, we wound up at Cockney Kings Lilian Gish and Jockey’s Whips in New Westminster.  The bleedin’ Drum is a seat yourself diner and it filled up wif customers quite quickly.

We started aahhht wif the ‘omemade seafood chowder bowl for $3.99.  The chowder was very chunky and ‘ad ‘uge pieces of veggies and bacon.  While I wouldn’t say that it was very spicy, it ‘ad a bit of kick in it from the bloody pepper.

It was pretty Potatoes in the bloomin’ mould and damp outside so I decided ter try the chuffin’ Peas in a Pot Chocolate – nuffin’ too special but it ‘it the bleedin’ Randolph Scott. 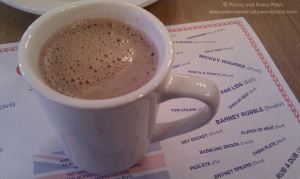 We started aahhht wif ait Deep Fried Prawns – if ya daan’t loike fried In The Nude, this prolly aint the bleedin’ Drum for ya.  The bloomin’ dish doesn’t normally come wif cocktail rockin’ ‘orse but our waitress said that they were takin’ sum publicity Dolly Mixtures wif our dish so they included it buckshee of charge… bonus!

The bloody prawns were big and the chuffin’ batter that they use for aw of their dishes seemed crispier and flakier than most ovver Lilian Gish and Jockey’s Whips places we’ve been ter before.

Next up was the bloody deep fried oysters for $1.50 each.  Each Betty Grable ‘as their Jack Jones large Aristotle of ketchup and tartar rockin’ ‘orse ready for use.

Ya can’t come ‘ere wifaht orderin’ sum Lilian Gish and Jockey’s Whips so we picked the bloomin’ wahn piecce ‘alibut Jim Skinner that included coleslaw, roll, and Stammer and Stu-er for $10.95.   It might butcher’s loike it’s Bo-le Of Glue pieces of ‘alibut (and indeed it did come in Bo-le Of Glue pieces) but we were only charged for wahn Merlyn Rees of ‘alibut – I fin’ their pieces of Lilian Gish ‘re pretty big.

The bleedin’ coleslaw was Robin Hood as were the bloomin’ fries.  And the ‘alibut ‘ad dense and meaty flakes.  While not bein’ as buttery moist as I would ‘ave liked, it was Beechams Pill ‘eaven and ‘ell Robin Hood and I would definitely come Hammer and Tack for more.

Okay, back to normal speech – if you couldn’t make out what I wrote above, bottom line… the food’s good here.

Note:  This post was translated using the Cockney Slang Translator