It was a dark and stormy night.  The fog was rolling in and blanketed the entire beach front with an eerie sereneness.  As we walked the lonely pathway from the Kits parking lot to our ultimate destination, I experienced an uneasy feeling of déjá vu… this was all too familiar.  I’m sure that I’ve seen this scene many times before in those slasher/horror flicks… right before the people get attacked by zombies/vampires/werewolves/aliens/long-lost-monsters-from-a-time-long-ago/or <gasp> Justin Bieber!

But seriously, it was really foggy the night we went to The Boathouse in Kits… so much so that it was impossible to enjoy the view that draws so many people to this restaurant.  It was pretty busy this night (probably due to Dine Out) but service still seemed slower than it should have been.

We started off with some really crusty sourdough bread.  The herb butter was a bit hard when they served it to us but it melted quickly over the piping hot sourdough. 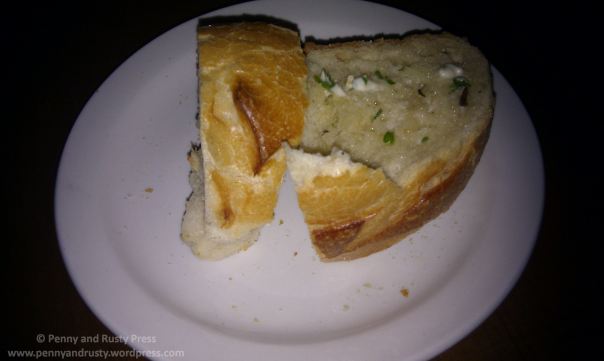 We picked soup for our appetizers but I was a bit underwhelmed by the West Coast Seafood Chowder.  Despite the three mussels, the rest of the chowder didn’t seem to contain much other seafood – but it was pretty creamy.  The Lobster Bisque had two small pieces of lobster on top of a crouton and was served by the waiter pouring the bisque at the table.  He explained that the essence of lobster was extracted from shells that had been boiled down into this soup.  While there wasn’t a lot of lobster meat in this soup, it was pretty good.  I think I liked the Whiskey Crab Soup that we had at the New West location last year better though. 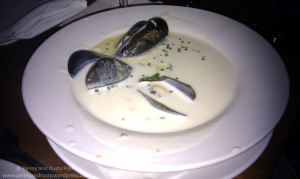 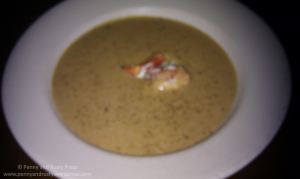 As I mentioned, service was pretty slow this night and we had to wait an extremely long time for our entrées to come out.  The 7 oz Sirloin with Lobster Thermidor was slightly overcooked but this worked out for the best.  My wife was flipping between wanting medium and medium-rare and ultimately decided to go with medium-rare but the steak came out right between medium and medium-rare.  I’d like to think that they cooked this perfectly to my wife’s liking but I think that just happened to be a happy accident.  The lobster thermidor, however, was a disappointment as it was no where near as creamy as it should have been.  I thought they were a bit skimpy with the lobster meat but I suppose that’s to be expected given the $28 Dine Out price point.

I picked the Miso-Crusted Wild BC Halibut and I have to admit that it was worth the extra $10 price difference.  It’s no wonder that this is a Boathouse favourite… this was one huge piece of halibut.  Better still, the large dense flakes were both meaty and tasty with the sweet soy glaze it was served with.  It also came with a serving of wild rice and broccolini. 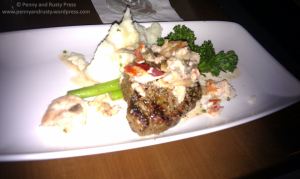 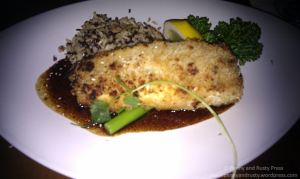 For dessert, there was a choice of Espresso Crème Brûlée, New York Cheesecake, and Mocha Mud Pie.  We saw other patrons order the New York cheesecake – it was a huge slice and we had just had cheesecake at The Keg so we decided to go with the crème brulée and mud pie instead.  The crème brulée was pretty good – it didn’t have too much espresso flavour to it (which is to my liking).  And the mocha mud pie wasn’t bad but it wasn’t as cold as I thought it should be.  If I had to choose between the Mocha Mud Pie at The Boathouse and the Billy Miner Pie at The Keg, I’d have to pick the Billy Miner, hands down.

I’m sure the food and service suffered a bit from the Dine Out event and the atmosphere would have been better if it wasn’t so foggy out.  My recommendation would be to come back when the weather is clearer and when it’s not so busy (but given the location, I’m sure this place gets pretty busy during the summer months).