I’ve heard that the catch this year is smaller (something to do with smaller quotas I think).  For some reason, they always try to talk us out of ordering a larger King Crab… I’m not exactly sure why since we’re willing to pay for the bigger crab.  I guess they try to save the larger crabs for the bigger tables (we only had 7 people and wound up getting a 6.5 pound crab – probably 3 pounds smaller than I would have preferred).  At $18.80/lb, this was definitely more expensive than some other restaurants out there but the food quality and service is usually pretty good. 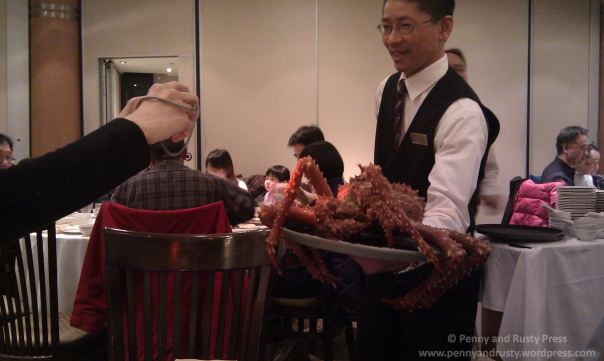 We started out with some Crab and Fish Maw Soup (the red stuff is vinegar that I added to my soup).  There were big, full chunks of dungeness crab in the soup and it was an excellent way to start off our meal. 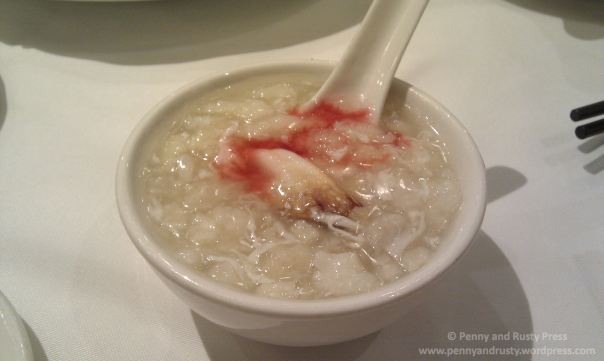 We also ordered the cold Appetizer Platter which came with jellyfish, surf clam, a deep-fried immitation-crab item, bean curd sheets (I think) and some sort of sliced meat (it’s usually best not to ask what kind of meat it is).  Jellyfish is always a hit but I think the surf clam was a bit tough – I think if they had sliced it thin, it would have been fine but since it was so thick, it was a bit chewy. 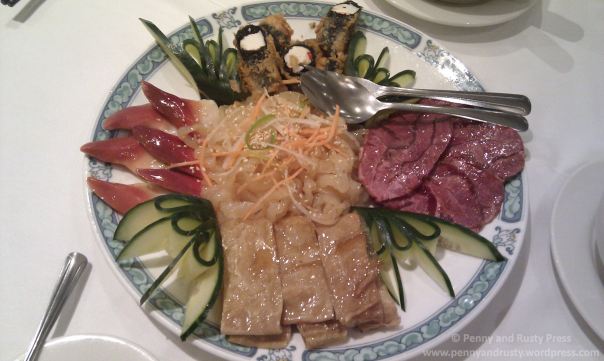 Next up is the deep-fried spicy knuckles – this method of cooking King Crab is always a fan favourite.  I just wish we had a bigger crab so we could enjoy more of this.

We also opted to have the Curry/Portugese Rice baked in the shell for an extra $15 and it was well worth it.  The rice was really creamy and tasty.

Of course, we needed some other dishes so we picked up a couple of veggies… Stir-Fried Beef with Gai Lan and Sliced Fish Fillets with Gai Lan. 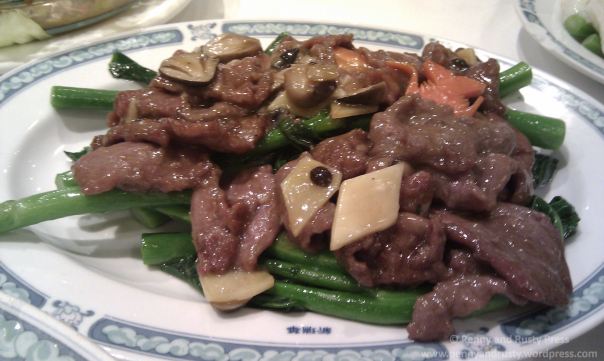 To complete our meal, we also ordered the Steamed Rock Cod (one and a half pounds) served in a light soy sauce.

The last time we had King Crab at Sun Sui Wah, we also wanted to order their famous Baked Tapioca Pudding but were told that we needed to order it in advance.  This time around, we made sure to reserve one when we called in for our reservations.  Of course, we always have problems with our reservations so we weren’t sure if they really heard us.  When we placed our order, we made sure to remind them that we also had the Baked Tapioca Pudding that we ordered and they said “yes” but when the end of our meal came, the waiter didn’t seem to know that we reserved it.  We were a bit worried at first, but we did wind up getting our dessert.

I know why this dish sells out – the soft tapioca and red bean filling is creamy (but not too sweet) and melds well with the flaky baked crust on top.

Last year, we were fortunate enough to try out King Crab at Excelsior Restaurant in Richmond (which has recently been voted as the restaurant with the Best King Crab Dish in the Diners’ Choice Awards).  I know it may seem odd that a noodle shop would have the best King Crab dish but we thought it was pretty good.

Update:  Prices have seemed to have gone up rather quickly this year… I’ve called around a couple of restaurants today for King Crab prices:  Western Lake Chinese Seafood was $20/lb, Rose Garden was $16.99/lb, Empire Seafood Restaurant was $16.99/lb, and Flamingo House Chinese Cuisine didn’t have any today because their supplier was asking $22.90/lb for their cost so they were waiting for the next shipment to come in to see if the prices were lower. In addition, all restaurants only seemed to have the larger crabs (9+ lbs) available.