Alaskan King Crab season seemed to come and go really quick this year so we were surprised to see that Empire Seafood Restaurant still had a huge tank full of the tasty critters 2 weeks ago.  More surprising was the fact that the prices were still relatively cheap at $16.99 per pound (I called around some other places the same day and they were charging anywhere from $23 to $28 per pound).

Anyhoo, this post isn’t about AKC unfortunately (sniff, sniff).  Instead, we came for dim sum on the Easter weekend – despite it being a bit busy, we managed to get a table right away (one of the benefits of being just a party of two).  They offer a 20% discount before 11 am so it’s pretty busy in the morning and by 11am, the place clears out really quick.

We started with some Deep Fried Eggplant with Shrimp Paste.  The frying process gave the eggplant a little crispy exterior.  I know some people don’t like eggplant because it’s a bit mushy but this was a pretty good execution.

The Steamed Turnip Cake with Preserved Meat came in a ceramic bowl – at first, I thought it was a soup because of the way it looked but it has a slightly more solid consistency than soup.  I think I was confused at first because I’m used to having this steamed variety in a shallower container.  Unlike the pan fried variety, this turnip cake really doesn’t hold it’s shape but I rather enjoyed it. 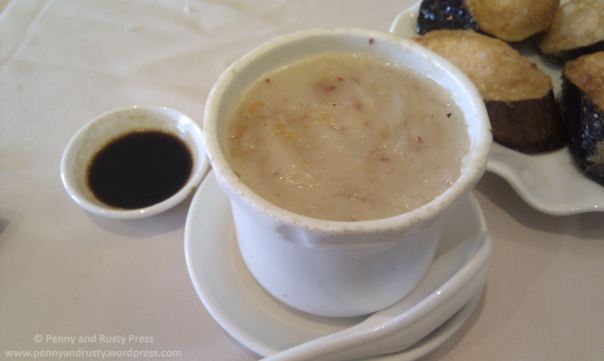 The Pea Tip with Crab Dumplings were tasty and had a nice translucent wrapper that allows you to see the filling before you pop them in your mouth.

The Duck with Taro Pastry was reminiscent of the Taro Duck that we’ve had at Flamingo House Chinese Cuisine but in a small bite-sized version.  These little puff balls had plenty of duck meat as well as Chinese mushrooms. 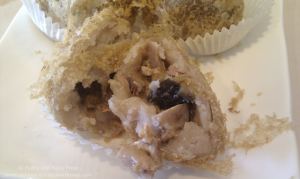 We usually stick to a couple of classic dishes when we go for dim sum and one of those dishes is Steamed Minced Beef Balls.  There’s no confusing these with Italian meatballs – these beef balls are much more juicy – I’m guessing from a combination of the steaming process and the ingredients they put into the mixture.

Empire puts a small twist on the classic Steamed Beef Rice Rolls dish by including some veggies in the filling.  The meat filling was good and the inclusion of the veggies was a nice surprise for us.

I wish we were a bit hungrier… we might have tried the AKC.