With so many great bakeries and cafés around Vancouver, how do you know which is the best?  And best for whom?  Everyone has different tastes but I think it’s only natural that we try and draw comparisons from similar experiences to help us categorize our hectic lives.

So, although I did try the macarons, almond croissant, and pain au chocolat from both Thierry and French Made Baking in the same day, the comparisons that I’m about to make aren’t meant to say one is better than the other… they’re different.

Thierry Chocolaterie Patisserie Café, for those of you that have been hiding under a rock, is a popular purveyor of macarons, baked treats, and all things chocolate located in downtown Vancouver on the same block as Tiffany & Co. (as if you needed another reason to visit).

Macarons have been the poster child of the food blogging community for the last year or so… and with good reason… these aren’t your grandma’s old, crumbly, coconut macaroons that you were forced to eat to when you were a kid.

Before we get to the rest of the post, I just wanted to mention the Liquid Chocolate that I had at Thierry.  Just to be clear, this is not a fancy version of hot chocolate.  This is quite literally liquid chocolate – a house blend of dark chocolate that’s been melted and served piping hot as a sipping drink.  This is really meant for hard-core chocoholics.  I love chocolate (rarely does a day go by that I don’t have some form of chocolate) but this drink is really intense.  The Liquid Chocolate’s richy and velvety texture goes hand-in-hand with it’s price ($7.45).  The house blend had a bittersweet tone and I found myself humming Adele songs while I drank it on their outdoor patio on a chilly Saturday morning.  I swear that I had chocolate oozing out of my pores after I finished this drink (I’ll let you decide if that’s a good thing or not). 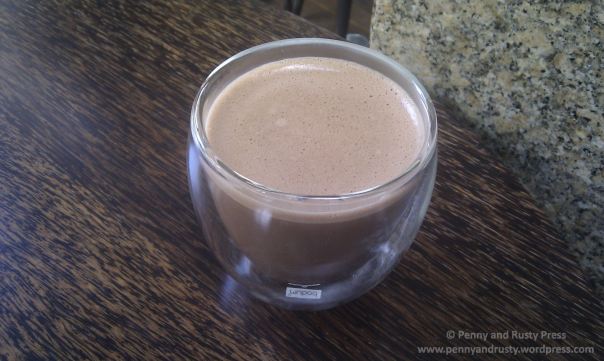 Presentation and appearances do matter to some degree and I have to say that the Macarons at Thierry come in a cool hexagonal (is that a word?) tube that both protects the macarons and looks stylish.  For the macarons themselves, they actually have quite a big amount of variation in sizes and shapes but I’ve found that they tend to be on the larger size (especially when compared with the ones from French Made Baking).

I liked the fact that these macarons had a good aroma – I could smell them as soon as I slid open the container.  Unlike some other places, Theirry didn’t have many different flavours available and I found their colours to be a little more on the brighter side.  I suppose that makes sense because, to me, these macarons feel like they’re screaming for attention and they aren’t going to take “no” for an answer.  In addition to being larger, they are also more dense and have more bite to them – I would almost say “meaty” if they had meat in them… after you eat one of these macarons, you know that you’ve eaten one. 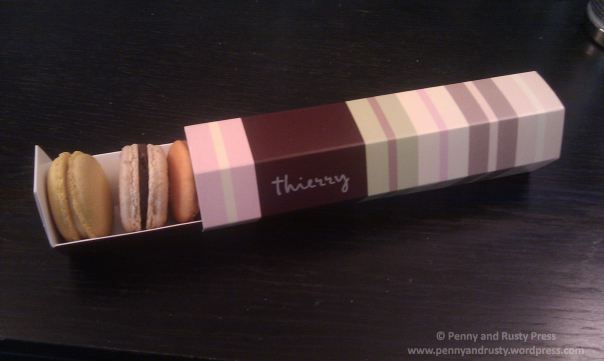 The filling of these macarons was also noticeably larger than French Made Baking.  I’m not entirely sure which flavours I picked up but I’m pretty sure that I tasted coconut and lemon flavours.  Taste-wise, I did enjoy eating these macarons.  If you like macarons with more body, these might be for you… take the time to inhale the aroma before you eat them. 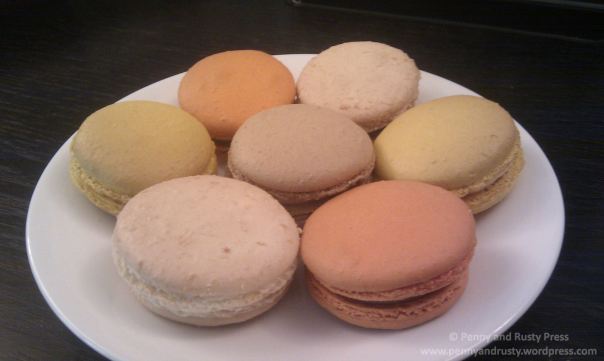 Okay, here we go… A supremely awesome Almond Croissant.  When I order an almond croissant, I want almonds and Theirry does deliver.  There are tons of sliced almonds on this croissant that, when paired with the texture of the croissant, gives this pastry a nice crunch before hitting the creamy almond filling on the inside. 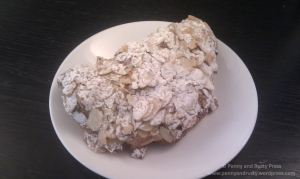 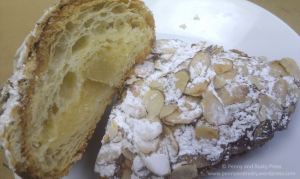 The Pain au Chocolate was rather good too – it was quite puffy and the chocolate was quite good.  Not quite as good as the one we had at Thomas Haas but quite respectable. 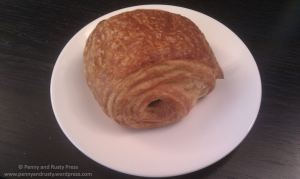 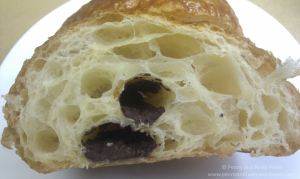 I feel that all of the items that I tried on this day had a lot of substance to them – if that’s your cup of chocolate, then you’ll probably like this place.

In regards to service, I will give them props for advising me that the macarons should be stored in the refrigerator and taken out 15-20 minutes before enjoying.  Of course, my response to this was “so you’re assuming I’m not going to just polish these all off as soon as I get home?”

Stay tuned for my review on French Made Baking.