Shady Island Seafood touts their fish and chips as “The Best on the Boardwalk”.  That sounds like fighting words if you ask me.  Steveston has no shortage of places to find great fish and chips so what do you have to do to be the “best on the boardwalk”?

In truth, I’m not sure if the fish and chips here are the best because I haven’t sampled all of the different restaurants on the boardwalk.  Hmmm… sounds like a plan.

What I can tell you is that Mama’s Seafood Chowder was really creamy (more so than any other chowder I’ve ever had) and it had a bit of a kick to it.  Bonus points for the oyster crackers too!

While you can also get cod or salmon, I usually order Halibut when it’s available… it’s a bit more expensive but I think it’s worth it.  The halibut was cooked perfectly and the large flakes were still quite moist.  I was glad that the batter wasn’t too thick as well.  The fries, however, were a little limp and not as crispy as I thought they should have been.  The coleslaw was alright but nothing too spectacular. 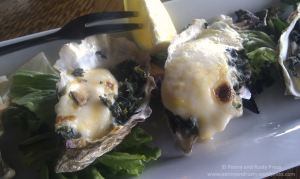 We were also looking for some oysters and wound up ordering the Oysters Rockefeller – oysters on the half-shell that are topped with spinach, shallots, and cheese and then baked up.  I found the oysters to be a little on the small side but they tasted pretty fresh.

Oddly enough, their washrooms are located on the 2nd floor – and I have to say that they live up to the restaurant’s namesake… a bit shady and quite in need of a reno.