Cindy’s is a small little diner/café located near Trafiq on Marine Drive in West Vancouver.  They were pretty busy on a Saturday morning so they must be doing something right.

I started out my meal with a Hot Chocolate with Whipped Cream ($3.78) that came in a huge white mug and chocolate sauce drizzled all over the copious amount of delicious whipped cream. 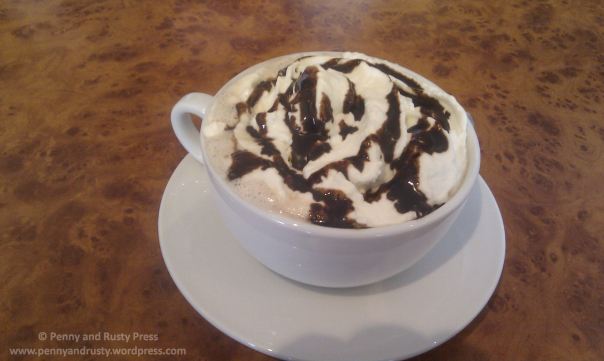 Looking back, we probably should have ordered either one of the bennys or Belgian waffles with whipped cream and seasonal berries because that’s what everyone else seemed to be ordering and those dishes did look really good.

The dishes that we ordered were okay but not too special.  And given the prices, they seemed a little expensive for what we received.  The first is the No Carb Scramble ($15.86) for 3 eggs scrambled with mushrooms, bacon, tomatoes, green onion, and cheddar cheese served with bacon and sausages.  As I mentioned, there was nothing wrong with this dish… the scramble was good but about twice the price of breakfast at the Fraser Park Restaurant.  I do like the fact that they offer a no carb option because so many breakfast meals seem to be heavy on carbs. 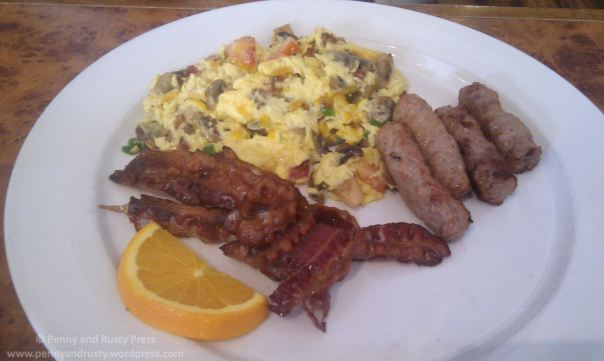 Personally, I like carbs so I picked Daryl’s Favourite ($12.78) which includes two eggs cooked any style, bacon or sausage, hash browns and multigrain toast.  I actually picked 1/2 and 1/2 for the bacon and sausages – the only hiccup was that when my dish arrived, it had neither 😦  I mentioned it to our waitress and she quickly rectified it.  I must admit that I really liked the hash brown potatoes here… they were quite crispy – almost like large french fries and I managed to polish them all off.  The rest of the meal was a bit average and the toast was a little dry.

Price-wise, for the dishes that we tried, it was a bit expensive and the food was only average.  If I came back, I would probably order the Benny or Waffles because they did look pretty good.