I’ve seen Happy Day Metro House on the corner of Kingsway and Marlborough many times as I’ve driven through Burnaby but it always looked a little sketchy from the outside.  Plus, the name almost sounds like it’s some kind of sleezy massage parlor.

When we walked into this small Korean restaurant, we were surprised that instead of playing the usual Korean soap opera/pop videos, they were playing Much Music… we were a bit disappointed because we’ve always looked forward to watching the cheesy music videos at other Korean restaurants like Potter’s Garden.

The Banchan at Happy Day was a little basic… kimchi, potatoes, broccoli, and sprouts. 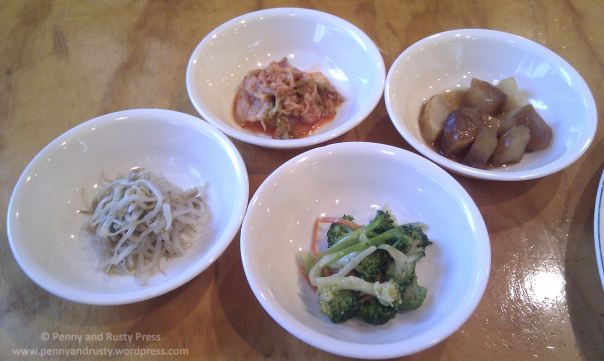 We didn’t realize it until afterwards but we wound up ordering all deep-fried dishes – like these Deep-Fried Dumplings.  The dumplings were fine enough but I wish that they came with a dipping sauce.  Our server brought a empty sauce bowl and told us that there was soy sauce already on the table that we could use.  And it wasn’t a special type of soy sauce… it was just a regular dark soy sauce out of the bottle.

Happy Day has a lot of chicken dishes and we wanted to try one of their deep-fried chicken wing dishes so we picked the Chicken Wings on Green Onion.  I found the name to be a little odd since the green onion was actually on the chicken.  The chicken used is actually full wings  but the pieces pull apart quite easily.  These wings were quite good – juicy and crispy and the sauce was slightly sweet and tasty.  I’m not entirely sure what kind of sauce they used but I would have this again any day. 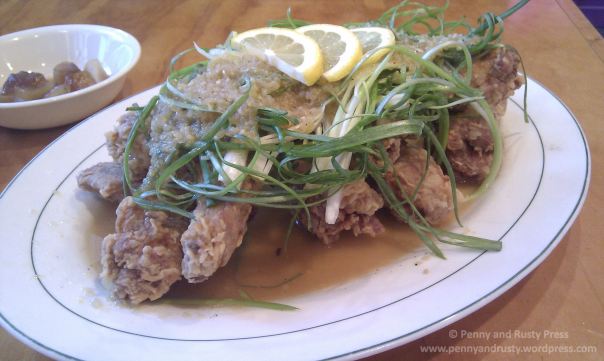 The Seafood Pancake was much thicker than I expected – this reminded me of Chicago-style deep dish pizza.  The outer portion of the pancake had a nice crisp to it but I wasn’t a big fan of the fermented bean hot sauce that it came with because it was a bit too salty.  I much prefer the regular dipping sauce that most other Korean restaurants use.  Fortunately, the sauce from the chicken wings actually went well with the pancake.

For some reason, the tables at Happy Day don’t have the usual call buttons that most other Korean restaurants have.  It’s ironic because this was one of the times that I felt like we actually needed a call bell because it was very difficult to grab the attention of the waitress.

The food’s not bad here – definitely try the chicken wings… but if you’re looking for some really good Korean grub around this area, try the nearby Potter’s Garden or Hanwoori.