Many moons ago, The Old Spaghetti Factory was the place to go to take your highschool sweetheart on a date.  Of course, at the time, there wasn’t as many options to choose from that were affordable for teenagers as there are now.  The prices at the Spaghetti Factory were (and still are) quite reasonable and includes appy, entrée, and dessert.

We haven’t been back to the New Westminster location for years, and like the original Gastown location, it can be a little sketchy at night owing to the proximity to the Sky Train station. 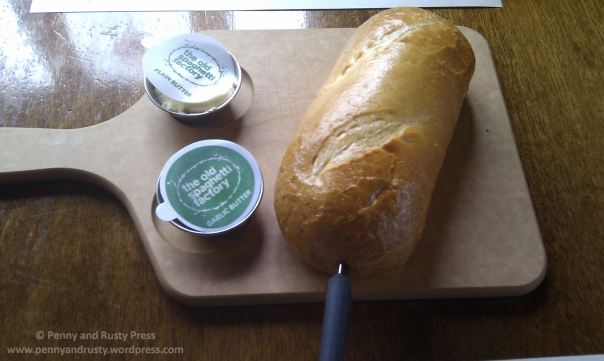 All of the entrées comes with complimentary Sourdough Bread and whipped garlic butter.  I remember the freshly baked bread tasting really good before but tonight I noticed that it tasted a bit different.

The only thing I can put my finger on is that the exterior was not as crusty as it should have been – it was somewhat chewy.

I ordered an Italian Raspberry Cream Soda ($3.95) but it lacked any real flavour and tasted mostly of soda.

With you meal, you get your choice of starter:  minestrone soup or crisp green salad… or you can choose other options for a small extra price.

The Spinach Salad (an extra $1.75) was pretty good – I’ve never had a spinach salad with apples and sliced almonds before but the crunchy texture was an interesting contrast to the soft spinach leaves.

The Clam Chowder (an extra $2.25) is a very creamy New England-style chowder that’s chunky with plenty of bacon, onion, and potatoes. 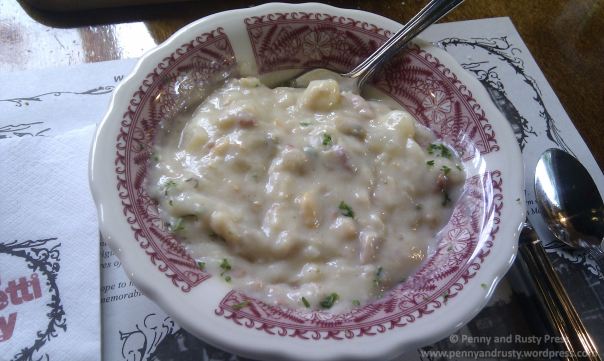 I picked the Red Thai Curry Linguine with Chicken ($14.25) that comes in a pleasantly spicy coconut-based curry sauce. 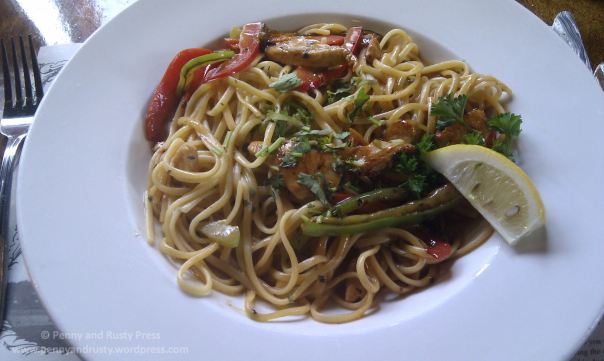 My date chose the Chicken Parmigiana ($14.50) which comes with a side of spaghetti and tomato sauce.  The chicken was pretty tender with some bits having a more crunchy texture due to the deep-frying process. Not as good as the one we had at Portobello Ristorante but pretty satisfying nonetheless.

No meal at the Old Spaghetti Factory would be complete without Spumoni Ice Cream… in truth, it was more like pistachio ice cream with a bit of chocolate mixed in but it was still a welcome treat.

As I mentioned earlier, this location was a bit sketchy in the evening and we could clearly see some “eccentric” individuals passing by the windows as we dined.  That in itself didn’t bother us but it was the drunk diner in the restaurant that was more bothersome.  At a nearby table, some dude was polishing off a pitcher of beer and was clearly a couple of drinks past his limit as he started to create a ruckus as everyone else in the restaurant watched on.

I’m surprised that one of the restaurant staff didn’t intervene.  Our waiter, who started off pretty good, suddenly disappeared and was MIA for the rest of our meal.  A waitress who was covering a nearby station finally came by and got us our bill so we could leave (but by this time, the drunk diner had already left).