Max’s Restaurant – Cuisine of the Philippines

I first noticed a new restaurant along Kingsway a couple of months ago.  At the time, I wasn’t sure what kind of food they served – all I could tell was that it seemed bright and clean and had an inconspicuous name… Max’s Restaurant.  I figured it was either a new burger joint or some kind of fast food outlet.

I finally found an excuse to drop by for take-out the other day and found out that they serve Filipino cuisine.  Apparently, Max’s Restaurant is a popular, long-established franchise that started in the Phillipines after World War II.

The first thing that I noted upon entering the bright and clean establishment was that it was fairly busy at 5pm on a Friday and that there were quite a few staff working at the time.  I’m not accustomed to Filipino food so it took a while for me to decide on what to order.

I ordered the Bicol Express which is basically deep-fried, thick cut pork belly that’s served with a coconut cream sauce.  If you’ve never had deep-fried pork belly, I suggest that you really ought to give it a try.

Max’s Restaurant is known for their Fried Chicken (1/2 chicken shown) but this is not like the fried chicken you get at KFC.  The chicken is not battered and is quite oily – it’s closer to the crispy skin chicken that you would find at a Chinese restaurant than it does to KFC.  I actually thought this was pretty good (and even better when I used the coconut cream sauce that came with the Bicol Express for dipping). 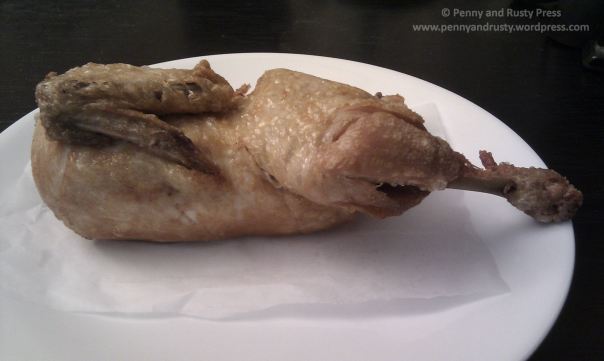 With all of the fried food, I felt like we needed some veggies so I picked the Pinakbet – okra, string beans, eggplant, squash, bitter melon, pork and shrimp with a really pungent and purple sauce that took me a while to put my finger on… turns out it was a shrimp paste known as bagoong alamang.

The flavours in this dish might be a little overwhelming for the regular Western palate (specifically the bitter melon and the shrimp paste) but it’s refreshing to find a dish that slaps you across the face and says “Yeah, this is how I roll and I ain’t afraid to show it”.

I picked up a side order of Garlic Rice – like the veggies, this was quite fragrant and had my entire car smelling of garlic on the ride home. 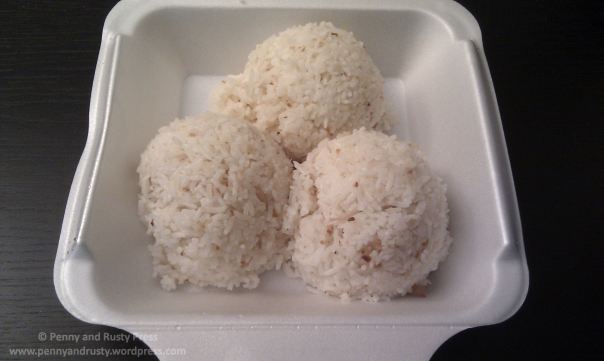 Overall, I was pretty impressed and intrigued of what some of the other dishes would taste like.  It seems like a lot of families come here so I might stick with take-out to avoid the little kiddies.