One of our favourite reasons for coming to the PNE was always the SuperDogs show but it hasn’t been the same since Herb Williams retired.  That coupled with the time change this year to a 1:30pm showing made this year the first one where we missed the SuperDog show.

Our other reason to visiting the PNE has always been trying out all of the artery-clogging food that you’re not supposed to eat but you do anyways because it’s only a once-a-year thing.  Like a sacred pilgrimage to a shining altar devoted to the gods of deep fried foods.

Speaking of deep fried foods, our first stop over the last few years has always been to pick up a Pennsylvania Dutch Funnel Cake.  The people in this food stand fry up everything from funnel cakes to pop tarts and oreos.

I actually never heard of a funnel cake until a few years ago but I’ve been hooked ever since.  This year, they also had a bacon version of the funnel cake but we stuck with the classic Strawberry Deluxe Funnel Cake.  It was super hot today and the whipped cream melted very quickly.

We’ve had the Deep Fried Oreos before from this stand and remembered it to be truly awesome.  The oreo cookie would melt into the consistency of s’more filling.  For some reason, these weren’t as good as I remembered.

Those Little Donuts – yes, those cinnamon and sugar treasures that are so addictive.  When I was younger, I used to be hyptonized  by the way the dough would shoot out of the machines into perfectly rounded rings and fall into the hot oil to be magically transformed into a delicious golden brown.

Of course, back then, they used to give you a lot more donuts in the bag… now it’s down to a dozen for $3. 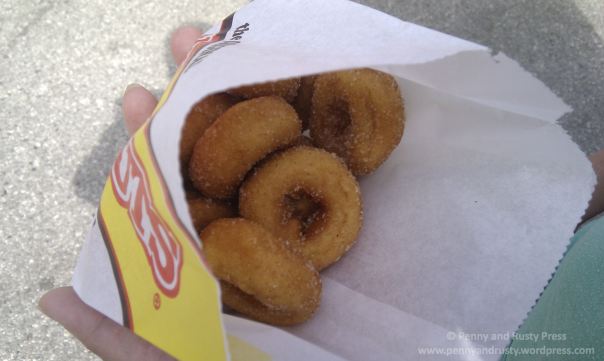 This was one of the first years that we haven’t eaten lunch inside the PNE (see my next post on Le Petit Saigon).  To see some of the food that we had last year, check out our prevoius post on PNE 2011 Fair Food.

After our lunch, we headed back through the food zone and picked up a Colossal Onion.  It’s been a long time since I’ve had a bloomin’ onion (it seems most restaurants that used to serve it have stopped).  At $9, I was figuring that this had better be one monsterous onion and it didn’t disappoint in size.

There’s more than enough onion petals to share and dip in the chipolte mayo.

We barely made a dent into it and wound up not finishing it.  Looking back, I probably would have been satisfied with a regular onion as opposed to a colossal onion.

Will this be our last visit to the PNE?  We’ll have to wait until next year to see.