I remember coming to Kyung Bok Palace many years ago but haven’t been back for a while.  Back in the day (I’m guessing when it first opened) it was quite a busy AYCE joint as there were long line ups for dinner.  At one point, I thought they had closed down but it looks like they are still kicking around. 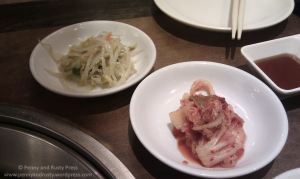 Although not included in the AYCE menu, I added the Mango and Peach Fruit Slush for $3.95.  I was slightly disappointed that the drink was way more peachy than mangoy but it was refreshing. 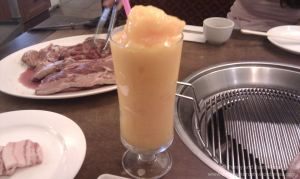 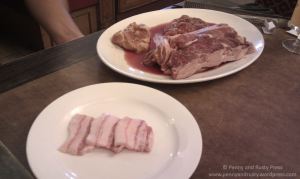 The chicken was a little more fatty than I was expecting and the fatty pork belly slices (basically bacon) were way smaller than what the menu picture looked like.  Our first round of bbq meats were pretty good and we actually wound up ordering some more later.  The Seafood Tofu Soup had a very spicy broth and plenty of large pieces of tender tofu but not very much seafood in it. 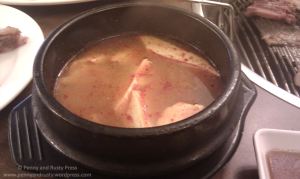 Years ago, we used to like the sushi that they made here so we picked up the Spicy Tuna, Kappa, Salmon, California and Katsu Rolls.  The Katsu looked kind of interesting with the shredded lettuce on top but, overall, the sushi wasn’t that special this time around.

We actually only ordered 3 pieces of Seafood Pancake and they wound up bringing us a full order (6 pieces).  Unlike other Korean restaurants where the seafood pancake comes out on a hot plate, the one here just came out on a regular plate.  I was worried that it might be too much food but I found that this version had a really thin crust.  While there wasn’t much seafood in the pancake, I did enjoy it as it had a good crunchy texture and the batter wasn’t too thick. 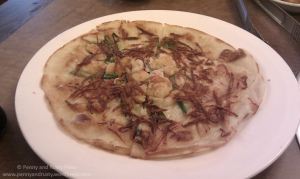 Our second order of BBQ beef was actually a lot more fatty than the first order.

Lastly, we ordered the Pork Back Soup that came with a large pork bone with plenty of meat on it.

The soup had a real meaty flavour to it but it was a little too strong for my liking.

The food wasn’t spectacular but what do you expect for AYCE?

The real problem with this restaurant is (and always has been) the service.  It has always been slow here and difficult to grab the attention of the servers.