Based on the menu, I think they must specialize in more szechuan cuisine… which isn’t exactly for the Western faint of heart… but I’ll get to more on that later.

On my first visit, I ordered the Szechuan Noodles with Peppery Sauce and Minced Pork ($7.98).  I was really expecting a spicy noodle soup but what arrived wasn’t the least bit spicy.  In fact, the soup tasted more like a miso-based broth than anything else.

The noodles were okay but slightly overcooked.  I’m glad that I ordered the minced pork version because it provided some needed flavour to the dish.  In fact, apart from the minced pork, there were nothing else in the bowl other than a large portion of noodles.  While okay, I think that if you’re looking for a non-Vietnamese noodle soup in the area, you’re better off to try nearby Kenzo Noodle House.

Seeing as this dish wasn’t very spicy, I wanted to give the restaurant another chance and go for something with a bit more kick to it.  Unfortunately, the next time I tried to visit Highgate Chinese Restaurant, they weren’t open at 11:30am as they should have been (as stated on the operating hours on their front door)… don’t you hate it when that happens?  I wound up going to Nao Sushi instead on that occasion but was left with a further hunger to try Highgate Chinese Restaurant again.

I finally made it back to this restaurant and ordered the Fried Lamb with Cumin ($13.98) along with a bowl of steamed white rice ($1.00).  Just so you know, they have a misprint on all of their menus where they call “lamb” as “lamp”.  I had to ask the waitress about this because I wasn’t sure what “lamp” meat was and she mentioned that they had to get their menus reprinted. 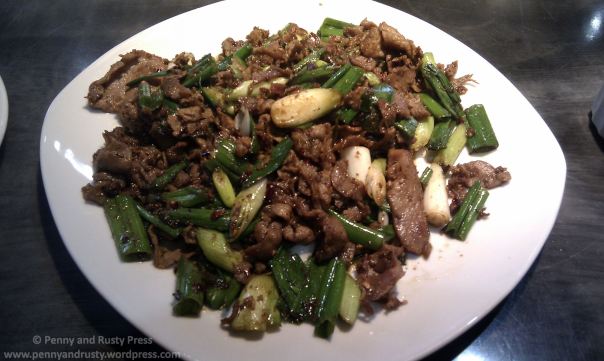 Now this was a much better selection that I made as the dish had a good spicy kick to it which helped to (temporarily) clear up my cold.  The dish is chock full of thinly sliced pieces of tender lamb that contrasted well with the slightly crunchy and pungent green onion pieces (which usually means that the green onions weren’t overcooked).

As I mentioned earlier in this post, the menu at Highgate Chinese Restaurant isn’t like the typical Westernized menu that you would get at a place like nearby Mr. Ho’s Wonton House.

When I arrived on my second visit, there were 2 middle-aged European-Canadian businessmen sitting at a table looking at the menu.  After a while of contemplative thought (and probably seeing the boiled blood soup) one of them said to the other, “Um, did you want to try going to Subway?” and they both got up and left.  Clearly, the dishes (or at least the description of the dishes) were outside of their comfort zone.

I’m not sure how much business this restaurant gets because on both of my visits, the restaurant was quite empty.