Okay, so when I said that Diva at the Met was going to be our last Dine Out of the year, I kinda stretched the truth.  You see, even though Dine Out Vancouver 2013 officially ended on Feb 3rd, the Sequoia group of restaurants (which includes Cardero’s in Coal Harbour) extended their $28 dinner menu until Feb 10th.

Cardero’s is the last of the Sequoia restaurants that I’ve tried (as I’ve mentioned before, we don’t find ourselves downtown too often and parking is so expensive).  We wound up parking at the nearby Coal Harbour Community Centre where parking is $2 for 90 minutes – a relative bargain in that area I think.

We started with an order of their Mussels ($15) served in a slightly spicy coconut curry broth.  We’ve had some poor excuses for mussels at other restaurants over the last few days so I was pleased that these mussels were plump and juicy.

The flash fried Wok Squid was tender and spicy with a good dose of garlic, ginger, chilies, and cilantro… it kind of reminded me of the squid that you can find at some dim sum places but not overcooked.

The hearty Manhatten Clam Chowder was served piping hot and was quite chunky. 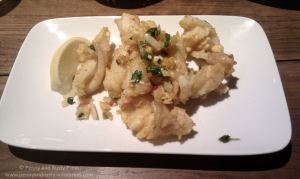 Regardless of whether you call it trout or salmon, I really enjoy a well prepared Steelhead and Cardero’s Grilled Steelhead Salmon was not disappointing.  Served with roasted vegetable succotash and a brown butter sauce, I liked how the flesh was moist and there was a slight char to surface. 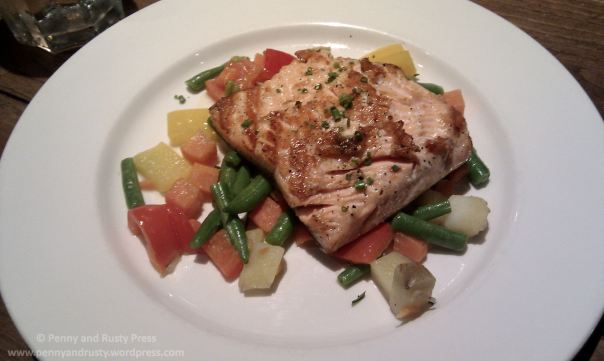 While there wasn’t anything particularly special about the mashed potatoes, the Braised Lamb Shank itself was prepared perfectly with the tender meat falling off of the bone and resting in a delicious red wine demi-glace.  The market vegetables included green beans, yellow carrot, and red pepper.

The Dine Out dessert had only one option… Cardero’s Chocolate Mousse Cake with a raspberry coulis but I’m not complaining.  This creamy cake was like biting into a soft, puffy, chocolate cloud and the coulis had just the slightest amount of tartness to compliment it.

The restaurant itself is in a beautiful location and the large open interior reminded me of Sandbar down in Granville Island (but i suppose that makes sense since they’re both part of the Sequoia restaurants).