Okay, I just want to put this out there… there’s nothing wrong with Westernized Chinese food.  Just because I’m Chinese doesn’t mean that I would shun a restaurant (think I’ve been watching a little too much of “Breaking Amish” on TLC) that serves Chinese food that caters to Western society’s tastes.  I figure if it tastes good… that’s all that should matter.

First Choice Chinese Food is a small little take-out joint that’s located on Kingsway right next to Anatolia’s Gate.  The place is a bit tired and dingy with only 3 small tables that have a clear view of the kitchen in the back.

First’s Special Chow Mein ($7.95) had an assortment of items in it ranging from beef, mushrooms, peppers, veggies, shrimp, BBQ pork, chicken, and broccoli served with soy sauce noodles.  The Singapore Style Fried Vermicelli ($7.25) had a nice curry aroma to it when I opened the container and had peppers, shrimp, BBQ pork, and scrambled eggs. 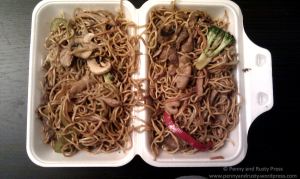 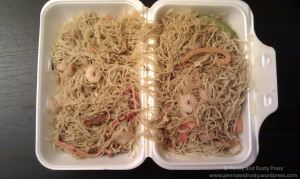 You don’t get much more Westernized than egg foo yong but it’s been such a long time since I’ve had it that I just had to order the First’s Special Foo Yong ($8.95).  Basically a layered egg omelette with plenty of fillings, it’s no wonder why this is so popular.  Like the other dishes, the filling included many of the same ingredients… mushrooms, peppers, BBQ pork, and shrimp in addition to peas and onions.  When I opened this dish, the aroma of the foo yong just flooded my senses with memories of eating this when I was younger. 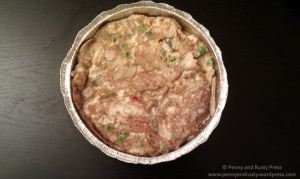 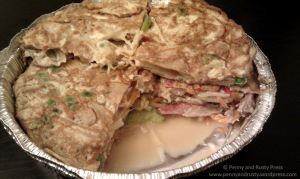 The Beef Brisket Hot Pot ($9.25) had plenty of lean and tender beef brisket but I was surprised that it came with broccoli (not something I’m used to having in a hot pot dish). 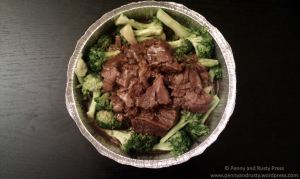 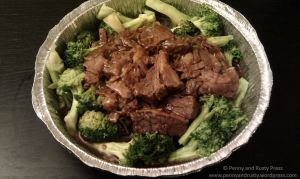 I found that they use many of the same ingredients for their various dishes which gives me the impression of a lack of variety/depth but at least the food was pretty tasty for what it was.  First Choice is probably more Western than nearby Mr. Ho’s Wonton House and a completely different from Highgate Chinese Restaurant on the same block.