Ahhh!  It’s Alaskan King Crab time again in Vancouver.  That ever so short time of the year when AKC is relatively inexpensive and you can find everyone heading to the nearest Chinese seafood restaurant to experience dining on king crab in the best manner possible.

In Vancouver, the season usually starts in early March and carries on for a month (or two if there’s a good harvest).  Usually, the best way of knowing when it starts is by looking for restaurant ads in the local Chinese newspapers.  But for those of us that can’t read Chinese, the next best method is by keeping your eyes open for the weekly T&T Supermarket ads online.

Right now, T&T is offering up these giant leviathans for $16.88/lb (about 1/2 the price that it usually goes for).  As it turns out, March 9th is National Crab Day so it was serendipitous that we picked this particular night for our first Alaskan King Crab fest for 2013. 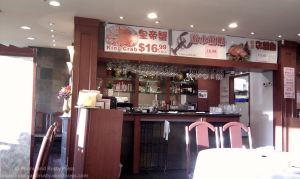 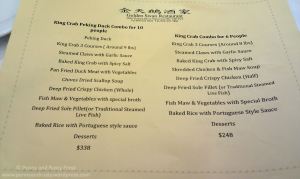 We’ve been to Golden Swan before but never for AKC.  Their price tonight was $16.99/lb (not the cheapest that I’ve seen in past years but still a pretty good price).  While you can order it à la carte, Golden Swan offers up a couple of special set menus with some of the most popular accompanying dishes.  The set menu comes with a 9 lb crab but ours turned out to be 10.75 lbs so we had to pay a bit more for our meal.

First up was Peking Duck… always a crowd favourite. 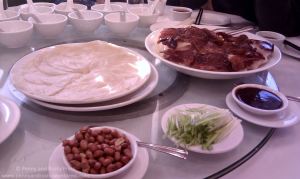 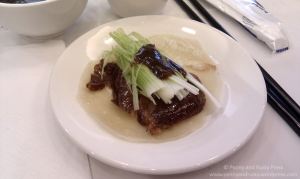 Next up was the Chives and Dried Scallop Soup with black fungus.  I’ve never had this soup before but it was a good refreshing course before the main event…

The AKC’s first course was with the legs simply steamed and topped with garlic.  I found that this course had a bit too much oil but the meat was nice and sweet and easy to pop out of the sliced leg shells.  The garlic was a bit off too… not sure what it was… perhaps the garlic wasn’t cooked properly. 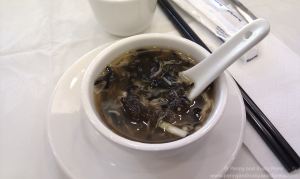 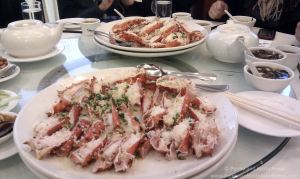 The AKC fried knuckles with spicy salt is always the most popular course.  There’s more meat in these pieces and it has a fuller flavour offset with the spicy jiu yim seasoning. 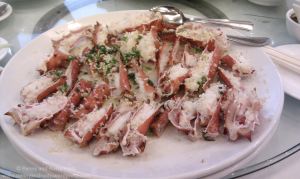 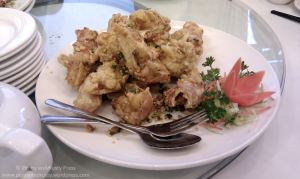 Most Peking Duck that I’ve had comes with 2 courses… the duck skin in crepes and then duck lettuce wrap.  In this set menu, the leftover duck meat (which was plentiful) was used to make a simple yet very satisfying dish with celery, baby carrots, and mushrooms.

While I like Deep Fried Crispy Chicken (and what kid in us doesn’t adore the shrimp chips?) I always find that the large slabs of chicken to be too meaty… but alas, this is the typical butchering/serving method done by most Chinese restaurants.  It reminds me of one year when we ordered a Christmas turkey dinner from Hon’s and they offered to “carve the turkey” for us.  We shouldn’t have been surprised but when we opened up the meal, the turkey had been chopped up the same way they chop up BBQ duck or chicken at the Chinese butcher shop.  Given how much larger a turkey is, just imagine how difficult those pieces were to eat. 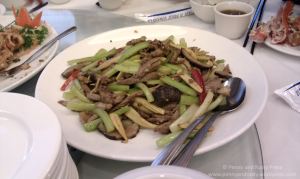 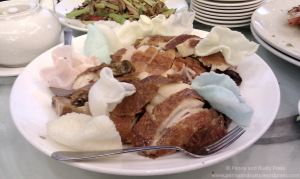 The set menu also came with a Deep Fried Sole dish that had a slight amount of spicyness from some of the same spicy salt that they used on the deep fried knuckles.

Last up for the AKC courses was the Baked Portuguese Rice in the king crab shell.  The only thing that could have made this dish better would have been if there was more of the curry sauce mixed in the rice. 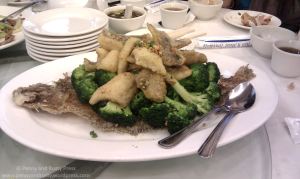 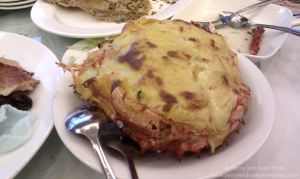 The last dish (before desserts) for the set menu was the Fish Maw and Vegetables in special broth.  Fish maw comes from the air bladder of the fish and really doesn’t have much of a taste to it by itself – instead relying on the broth that it’s cooked in to impart any flavour.

The “desserts” portion of the set menu came with the usual red bean soup common in many Chinese restaurants. 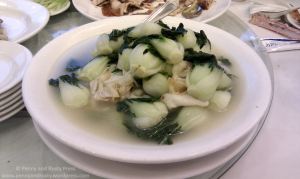 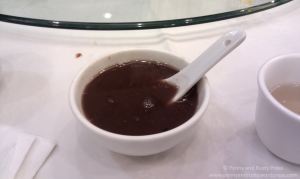 We actually pre-ordered a Baked Tapioca Pudding for dessert.  I think the thing that really makes this dish good is the thick pineapple crust that’s baked on top.  No, there’s no actual pineapple in it… they just call it that because it looks like the outer shell of a pineapple (just like the Chinese pineapple bun pastry).  There are different types of baked tapioca pudding… I think Golden Swan makes theirs with a taro filling instead of a red bean filling (like they do at Sun Sui Wah).  Speaking of Sun Sui Wah, stay tuned for tomorrow’s post on our next AKC meal at Sun Sui Wah. The price there is a bit more expensive but well worth it. 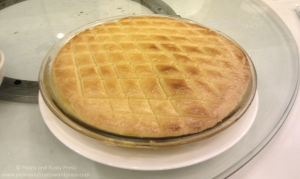 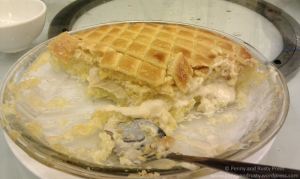 So if you’ve been waiting all year for Alaskan King Crab like us, make sure you go before the prices go back up.