There’s a lot of Chinese seafood restaurants that serve Alaskan King Crab in the Lower Mainland but one of the first (or at least the one who perfected it) was Sun Sui Wah.  Of course, Sun Sui Wah is our usual go-to place when AKC season starts up (take a look at our previous posts here and here and here).

Roasted Squab is one of Sun Sui Wah’s specialties but we don’t normally order it (much to the chagrin of one of our friends) because most of our group doesn’t eat it.

The Appetizer Platter is off of their special menu and includes smoked salmon and jellyfish among other cold items.

The Alaskan King Crab at Sun Sui Wah is always a bit more expensive than some other restaurants so we weren’t surprised that their price was $21.80/lb (compared to the $16.99/lb price we had at Golden Swan the night before).  But the extra price that you pay here is worth it because, I swear, they nail the preparation.

For example, despite having a smaller crab this night (8.25 lbs) compared to the night before (10.75 lbs), the pieces were larger, and more succulent.

We went with the classic 3 dishes of AKC which included the steamed legs with garlic, deep fried knuckles with spicy seasoning and the baked rice with Portuguese sauce in the shell. 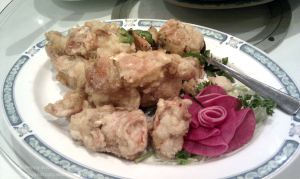 While the AKC at Golden Swan was okay, these dishes at Sun Sui Wah were markedly better in execution. 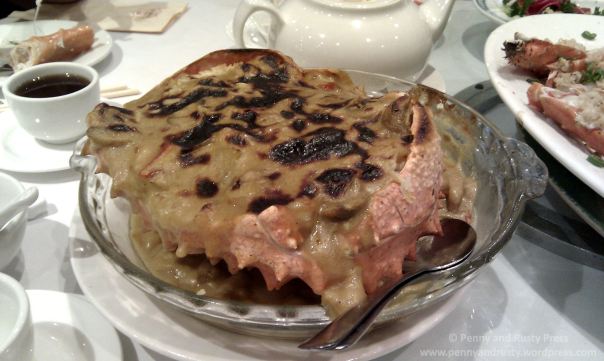 We grabbed a couple of veggie dishes including the green beans and pea tips to balance out our meal. 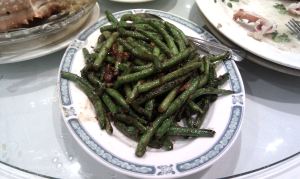 Knowing us, we needed more food so we also had the Crab and Fish Maw Soup and the Deep Fried Crispy Chicken.  As I mentioned on my last post, fish maw comes from the air bladder of the fish and isn’t very flavourful but it does provide textural contrast in the soup. 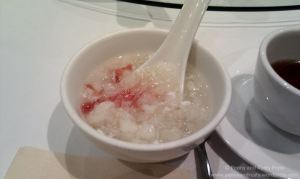 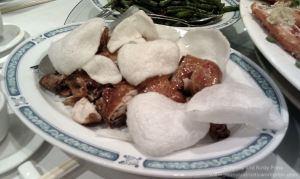 If you want their Baked Tapioca Pudding, you should make sure you order it in advance (we made the mistake one year of not ordering it in advance and were disappointed when they were all sold out).  Unlike the one at Golden Swan, Sun Sui Wah’s version uses red bean in the filling. 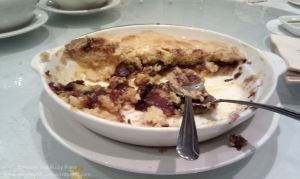 All through our meal, I couldn’t help but notice the small table next to us – or more to the point – the amount of food they ordered.  They were only a family of 3 yet they probably ordered more dishes than our table of 7… it was quite impressive.