The last time we visited Empire Seafood Restaurant was almost a year ago for dim sum prior to their move (they’re still in the same complex just a few steps away from their old location).  From what I recall, the dim sum was pretty good so we were looking forward to our Alaskan King Crab dinner here.

As you can see from the seafood tanks in the front of the restaurant, they had plenty of king crab available and, on this night, they were selling them for $17.99/lb.  From the looks of their new digs, the interior seemed pretty swanky.  We all thought the pattern on the china looked very nice… something that you’d find on someone’s wedding registry.  Of course, when we turned the plate over, there was no make or logo like you would find on fine china so it was probably some knockoff.

Now, let me just qualify the rest of this review by saying that we’ve eaten at many Chinese restaurants over the years and, with a few exceptions, we don’t really expect good quality service when we visit.  We’re usually just happy if the food’s good and they don’t mix up our orders.  That being said, there’s a bit of an unwritten rule that the fancier and more expensive Chinese restaurants tend to have (at least slighty) better service than you’d get at a cheaper Chinese restaurant. 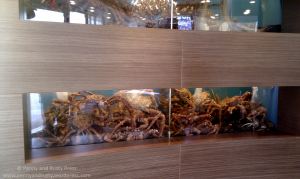 We wound up getting a 9.3lb Alaskan King Crab on this visit but it took forever to actually order it.  Actually, all through the evening, we couldn’t grab the attention of any of the waiters.  Everytime we tried to flag someone down, they turned around and went to help another table.  I swear, it was like we were seated in the leper colony section.  When we finally did manage to order our dinner, we weren’t sure if the guy actually remembered to key in our order.  Usually when you order AKC, they bring out the crab to you right away so you can see what you’ve ordered.  After a very long wait, they did finally bring our crab out… one thing that I noticed about the king crabs here was that all of the crabs seemed to have skinny legs.

One of the first things that we noticed was that the presentation of their dishes was a bit plain, spartan, and all served on the same boring large white plates.  Seriously, would a little garnish or flourish on the dish have killed them? I have to admit that the garlic on these legs was better than what we had at Golden Swan but the meat on the legs at Empire seemed to be thin and had little inedible bits in many of the legs (not sure if they just didn’t cut the legs properly). 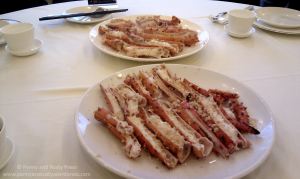 The Jellyfish and Smoked Salmon ($16.80) was okay but not as good as the appy plate that we had at Sun Sui Wah.

We picked the 3 course AKC and the second course that arrived was the Deep Fried Knuckles (which is an extra $10 on top of the AKC price and is normal at most restaurants).  There was plenty of spicy seasoning to this dish but I think they might have slightly over-cooked it. 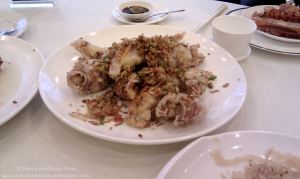 Empire is one of those places where they bring the Peking Duck ($36.80 for 2 courses) out whole to you to show you before hand-slicing the meat.  Or at least that’s what they did for the other tables… for our table, they just dropped off the sliced meat, pancakes, and sauce like any other dish.  The duck meat was sliced nicey with a fair amount of meat in each cut and this dish was one of the better ones for the night… even despite lacking the shrimp chips that you normally get at other restaurants. 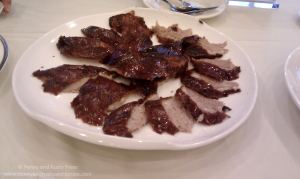 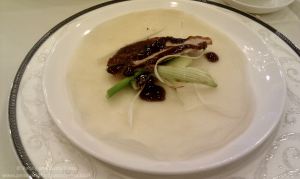 For me, the best part of this AKC meal was probably the Baked Portuguese Rice in the AKC shell (an extra $15) because it had a good amount of sauce to it.  I much prefer this over the plain e-fu noodles that I saw some other tables order.  Looking at the shell, I don’t think this was the same crab that we had ordered – it looked smaller.  Perhaps the shell shrinks a bit when cooked but I’m not sure if they just use whatever shell is lying around when they serve the rice dish.

We made the mistake of ordering 2 veggie dishes.  It’s difficult to tell in the pictures below because of a lack of frame of reference but these plates of veggies were monsterously huge.  Both were off-menu items:  Green Beans and Pea Tips and were probably twice the size of what we expected for each dish. 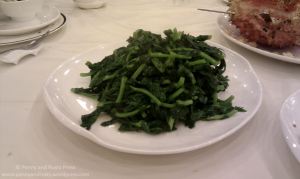 By the time the Duck Lettuce Wrap came out, we were pretty stuffed.  One of the other things that bothered me about this place was that the dishes seemed to come out in random order.  In some of the better Chinese restaurants, the dishes have a logical progression and are spaced out properly.  Here, there were times when they were rushing dishes to our table and other times when it seemed to take forever for the next dish to arrive.  Plus, it seemed like the servers didn’t know which dish was going to which table as I saw plenty of servers walking around with large plates of food trying to figure out where to go and having to call to other waiters to find out what to do.

I think some of the confusion at this restaurant is that the waiters don’t stick to a set of assigned tables so they never really know what’s going on and it’s hard to get their attention because one minute you have one waiter and then you never see him again. 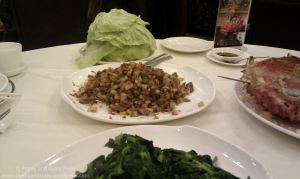 We had pre-ordered a Baked Tapioca Pudding but I was fairly disappointed with this version.  Actually, it was more like a Baked Taro Pie topped with some tapioca pudding.  Like Golden Swan, they use taro inside the dish but Empire uses so much taro that it’s very heavy and dry whereas Golden Swan’s version had less taro and had a better consistency to it.

At $17.99/lb, the AKC was a pretty good deal but you get what you pay for and it wasn’t as good as the AKC that we had the previous week at Sun Sui Wah.  For the prices of some of the dishes here, I expected slightly better in terms of service but there were a couple of dishes that were pretty good.  I probably wouldn’t come back here for AKC though and their version of Baked Tapioca Pudding probably turned me off the dessert for the imminent future.