Just a few blocks down from Taqueria Playa Tropical on 6th Street is an old home that has been converted into a German restaurant specializing in schnitzel.

When you walk in this restaurant for the first time, it really feels like you’re stepping into a bit of Bavaria. 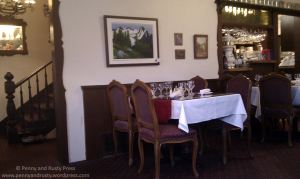 Both of our meals included Garlic Toast which was the first thing to arrive.

We also ordered the Coquille St. Jacques ($8.95).  It was different from what we expected as we’ve had this before at Les Faux Bourgeois (but I suppose that’s a French restaurant so you can’t really compare it to a German one).  The appy had quite a lot of whipped potatoes in a herb sauce with melted cheese so it was very filling.  I was only expecting one or two large scallops but it instead came with smaller scallops and shrimp buried beneath the potatoes.  I guess “hearty” would be a good way to describe it.

The Combination Dinner  ($23.95) comes with all of the best items including schnitzel, beef rouladen stuffed with pickles, bratwurst, spätzel, veggies, and red cabbage.  My best advise is don’t come here unless you’re hungry because you’ll want to finish everything on your plate.  The bratwurst, as expected, was quite good and I liked the pickles inside the rouladen. 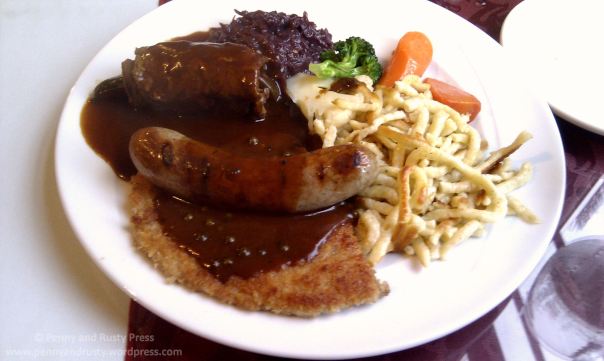 I picked the Cordon Bleu Pacific ($22.95) which takes a schnitzel stuffed with blackforest ham and swiss cheese and covers it with a healthy dose of shrimp meat in a bearnaise sauce.  The schnitzel was fried up to a perfect golden brown – they really know their schnitzels here. 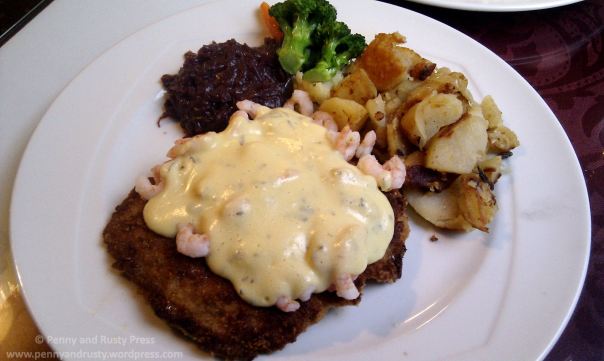 We ended our meal with the warm Apple Strudel ($5.95) which is made in-house.  You should really make sure to save a bit of room for dessert if you come here.

Mmm… I think I had dreams of schnitzel for days after visiting here.  Just wished that they opened for lunch.