Kalakaua Avenue is the place to go in Waikiki if you’re looking for shopping in a picturesque setting.  The Royal Hawaiian Center is a four-level shopping mall that spans three buildings on Kalakaua and is owned by the private Kamehameha Schools.  More importantly, you can find The Cheesecake Factory here (which is a must if you’re goiong to fuel your shopping spree).

The ceilings here have an interesting island motif going on.  I don’t remember getting complimentary bread on our visit to the location in Vegas but I wish we had.  The dark brown bread (which is a whole honey wheat variety) was my favourite and had a touch of sweetness to it.  If I wasn’t so full from our breakfast at Eggs ‘n Things, I probably would have had more. 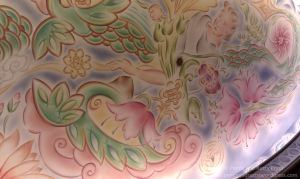 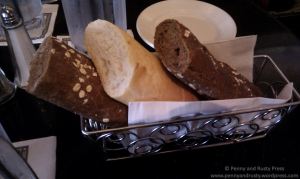 As it turns out, we also ordered the Popcorn Shrimp which came with both a cocktail sauce and an aioli sauce for the generous portion of deep-fried shrimp.

Up for a tongue-twister?  Try saying Craig’s Crazy Carrot Cake Cheesecake a couple of times.  They swirl together both carrot cake and cheesecake together and top it off with cream cheese icing for a dessert that’s decadent but not overly sweet. 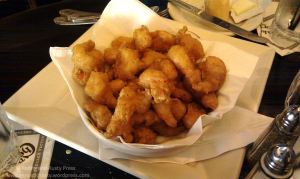 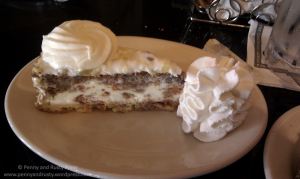 Our server said that the dark bread goes really well with a side of honey (as if you need more sugar in your meal).  After you finish, walk it off in the 31,000 square feet shopping complex (or just take a nap on the beach).