Our drive up to the North Shore was on a cloudy day with periods of hard rain.  After a brief visit to Kualoa Regional Park to see Chinaman’s Hat (Mokoli’i), we headed up to Kuhuku to check out Giovanni’s Shrimp Truck.

We tried using the navigation system in the car but we were having trouble with it all day (it kept telling us to make u-turns wherever we went).  Fortunately, Kamehameha Hwy is really the only major street so we stuck to it until we saw a large shanty town/trailer park filled with cars. 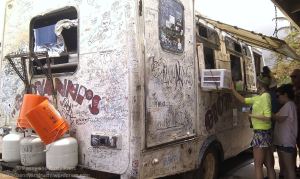 It’s hard to miss Giovanni’s… it’s the former white food truck that’s been covered over by the signatures of countless patrons. 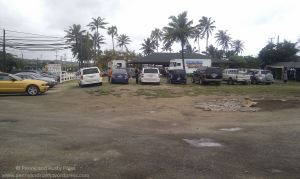 There’s actually more than just Giovanni’s located here.  There’s a few tents selling souvenirs as well as a few other food trucks serving the likes of bbq meats and corn as well as a Thai food truck.

The main reason people stop here is for the shrimp.  Just right next to the shrimp truck is a covered area where patrons can enjoy their shrimp plates.  We tried both the Shrimp Scampi and the Lemon Button ($13 per plate).  The scampi was the best and it’s no wonder that it’s their most popular dish.  They marinate the shrimp (shell on) in olive oil, fresh chopped garlic, lemon and butter and sautée them in a pan.  A bit sticky and messy but tasty nonetheless. 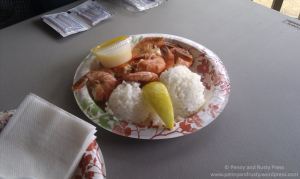 Perhaps not the best shrimp that I’ve had (mmm… thinking about spot prawns right now) but the scampi is a must try if you’re headed to the North Shore.

Note:  There is a water tap next to the covered dining area where you can wash up after you’re done.  There’s also a couple of washrooms located behind one of the buildings – just remember to lock the door because the stall inside the washroom doesn’t have a door.