While we enjoy eating at Joey Burnaby, we’ve had so much of their menu lately that we were looking for something a bit different.  Lo and behold, located just a block away is Browns Social House.

While there are aspects to Browns that are reminiscent of Earls, Cactus Club, and Milestones, I think the best way to describe Browns is as an understated version of Joey with a slight dash of irreverence thrown in for good measure.  Just look at their large poster of a squirrel standing in front of Richard Nixon or the names of some of their dishes (like the “Almost Famous Fried Egg Sandwich”).

We decided to have a mix of brunch and lunch items on this Sunday April morning.

Corned Beef Hash ($11.95) – two poached eggs covered in hollandaise on top of a mixture of corned beef, red peppers, onions, and breakfast potatoes served with salsa and toast.  One of the eggs was poached perfectly with a nicy runny yolk while the other egg was less runny.  I’m not sure if it was the salsa but there was a bit of a spicy kick to the hash.

The burger was a bit messy and I felt that the bun was just meh.  The worst part was probably that while the tuna was lightly seared, it was still cold throughout.  I’ve got nothing against sashimi but the coldness of the tuna just didn’t go well with the sandwich.  On the plus side, the crunchy onion ring was probably the best part of burger and it added a good textural contrast to the tuna.  I think if they had used a ciabatta-like bun (see the Grilled Albacore Tuna Club at Cactus Club) instead of a regular sesame seed burger bun, it would have worked better.

It’s always difficult to tell how good a restaurant is from just a few dishes so we dropped by for drinks with some friends a couple of weeks later.

They have everyday wings and dry ribs for $6 between 3 – 6 pm.  I’m not sure if they deliberately used the term “everyday” as it can also mean “ordinary” or if they were just trying to say it’s served daily.  In either case, I’d have to agree that they were in fact “everyday” wings.  It’s not a bad price but it would have been nice if they had some other selection of wings to choose from other than just hot.    The dry ribs are typical of what you’d find at other restaurants (although some pieces seemed to be chewier than others). 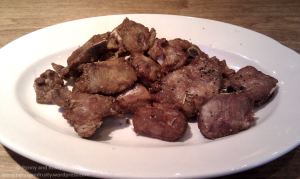 The Chicken Quesadilla ($14.95) comes with black beans, jalepeños, red pepper relish, guacamole and sour cream.  It also, oddly enough, comes served with an order of fries (you can substitute for yam fries, soup, salad, or edamame for an extra $1).  I say oddly just because I would expect tortilla chips as a traditional side for quesadillas.  I’m not complaining though because the double-cooked fries were pretty good.

Their dinner specials includes a Kobe Burger for $17.95 that includes cheese, bacon, and crispy bacon slices.  I usually make it a habit of avoiding burgers that are branded as “Kobe” since they rarely live up to the hype.  I think the beef was slightly overcooked – which is a problem when using Kobe or Kobe-style beef  since it dries the meat out.  The burger itself was, like the Tuna Club that we previously had, messy and used the same type of soft sesame seed bun.  The flavour wasn’t bad though and I did enjoy the crispy onion ring in the middle. 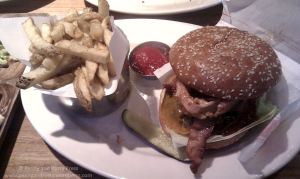 We tried some of the drinks like the Flirtation shots and the Social Palmer – not very strong and some of their drinks get watered down with all of the ice.  All in all, not as refined as a Joey location but an acceptable change up if you’re looking for some new options.