To eat AYCE or not to eat AYCE… that is the question.  While you could order off of the à la carte menu, the buffet is a better deal and you get to have a variety of dishes.

Saffron has a lunch buffet 7 days a week and a dinner buffet from Sunday to Wednesday which does fairly brisk business.

If you’re worried about the spiciness of some of the curries, you should order either the Mango Lemonade or the Mango Shake like we did. 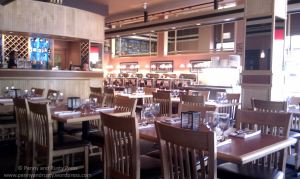 Butter Chicken and Prawn Masala.  Take my advice… grab a bowl of the butter chicken sauce and use it as a dip for the complimentary naan and pita bread that comes with the buffet.

Beef Vindaloo and Garlic Chicken.  Both of these dishes were rather spicy so it’s no surprise that they were my favourites.  During my school days, I used to watch countless Red Dwarf episodes where Lister would rave about a good vindaloo.

Palak Paneer and Eggplant Masala.  The eggplant dish was really good.  They use an eggplant that is much smaller than the variety that you normally see in western supermarkets.

Mixed Vegetables and Vegetable Biryani.  I know it fills you up, but you have to get some rice to sop up all of the delicious sauces.

Jackfruit Pakora and Vegetable Samosas.  The pakoras were awesome and had the perfect amount of crispness to them. 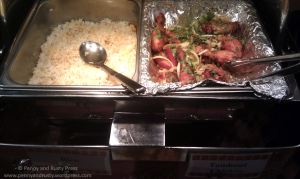 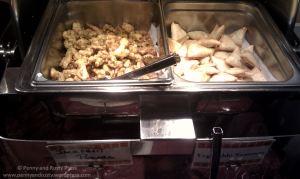 Naan and Roti.  My preference is for the naan which is the fluffier one on the left.  That being said, they were both great at sopping up the rich sauces.

The food here is quite satisfying but the problem with having AYCE at Saffron is that the food is so rich that you really can’t eat very much of it.

There is also a small salad/dessert station but be warned… some of those desserts are really sweet.