U & I Thai – Garden Roll with Duck

As I mentioned on our Quattro at Whistler post, we initially had our hopes up to trying Thai in the Village while we were at Whistler but it turns out that they were closed.  When we got back to Vancouver, we still had a craving for Thai food so we hit up U & I Thai on Cambie since we really liked their Red Curry Duck with Lychee dish.

We arrived for a late lunch and had the restaurant practically to ourselves.  First up was the complimentary Hot and Sour soup.  This soup really had a kick to it.

They have lunch specials so we ordered the Lard Na noodles ($10).  This is a stir-fried thick rice noodle dish served with veggies, chicken and covered in a thick gravy sauce.  I think there was actually more toppings than there were noodles. 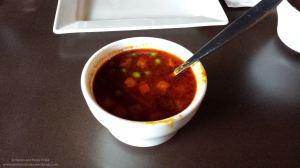 The Garden Roll with Duck is similar to a salad roll and has a thin rice paper wrapper.  I really liked this appy and the peanut dipping sauce went perfectly with the duck.

The Red Curry Duck with Lychee ($15.95) isn’t on the lunch special menu but it’s worth the extra price.  It comes with a side order of rice and you really need the rice to appreciate this dish.  They probably should have just given me a straw because I wanted to drink all of the curry sauce.