EBO Restaurant – The Brunch That Never Was

Experiences Beyond Ordinary is the catch-phrase and concept behind e.b.o. Restaurant located in the Grand Villa Casino in Burnaby.  I’ve been here previuosly for xmas dinners but, on this visit, we came for Sunday breakfast/lunch in September and it was practically deserted for our entire stay.

I had previously read some write-ups of interesting brunch offerings here but it seems like they only serve Sunday buffets during special occasions now.

Before I start with the food, I have to admit that the large chandeliers that hung from the ceiling were pretty interesting… now we just have to win the lottery so we can buy a place big enough to hang one of those suckers.

The BC Chowder ($9) was  super creamy… probably from the velvety fish velouté.  But it was difficult to discerne any of the seafood that was supposed to be in this chowder (smoked salmon and shellfish).  I would have preferred the seafood to be in larger chunks instead of being almost pureed to death. 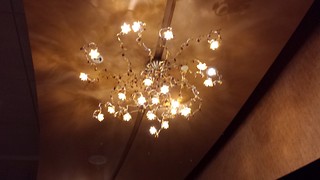 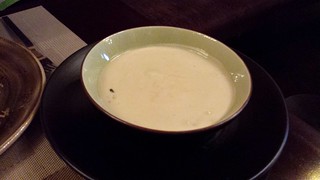 Speaking of creamy.. the e.b.o. Smoked Salmon Omelet ($14) with sub Seasonal Fruit ($3) had the double whammy of both avocado and Boursin cheese to deal with inside the fluffy omelet.  While I like both avocado and Boursin cheese separately, I feel that combining them here made this omelet too creamy… but that might be just my personal preferences.

Oh me oh my, I love me some Marble Rye.  I have to admit that ever since seeing that Seinfeld episode entitled “The Rye”, I’ve been fascinated by marble rye. 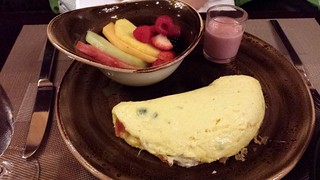 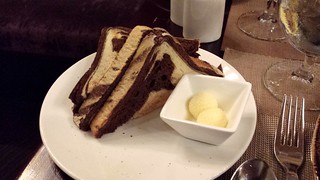 Rosy’s Spicy Chorizo Scramble ($13) was nicely put together.  The eggs were cooked properly and included chorizo, feta cheese, and asparagus served alongside crispy breakfast potatoes.  The potatoes didn’t disappoint and I couldn’t stop eating them. 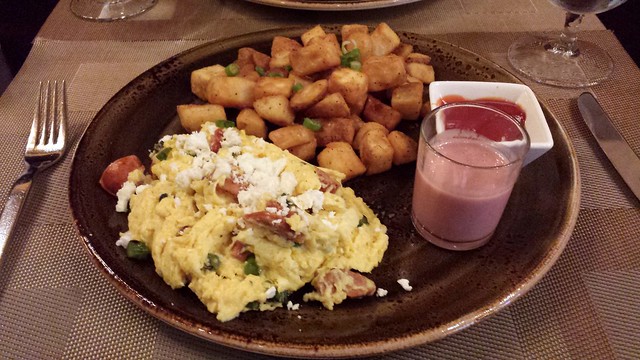 It’s too bad they don’t have Sunday brunch on a regular basis as I would have liked to have tried some of their other dishes.