When I think of British food, not much really comes to mind other than fish and chips.  My parents took us to London on vacation when I was in high school and all I remember was eating at Chinese restaurants while we were there.

Stepping into The Diner on West 10th is like walking into your slightly eccentric grandmother’s home (assuming your grandmother is British).  The walls are adorned with British knick knacks and pictures and the table cloths show their well worn wear and tear from years of use.

The charming elderly people that run this restaurant have got the classic British humour down pat… dry, sarcastic wit with a healthy dose of self-deprecation.  For example, after seating patrons, our waitress would tell the customers, “talk amongst yourselves and I’ll be back in an hour and a half.”

I wasn’t in the mood for tea this day so I ordered a Hot Chocolate ($2.40) instead – yup, those were candy stars in my drink. 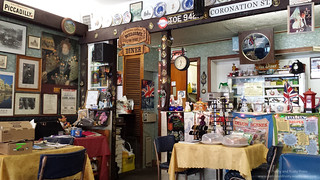 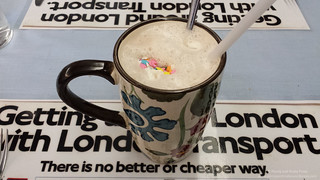 The Salisbury Steak ($14) was a very hearty dish with two thick patties of minced meat topped with a delicious gravy. 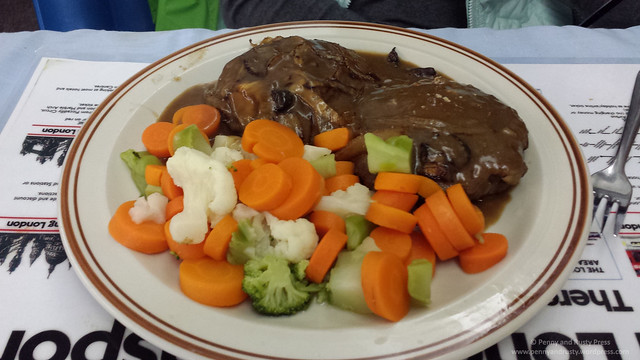 The fried bread reminded me of the shrimp toast that you find in some dim sum places (without the shrimp) – it was interesting to try as the texture isn’t what you usually get when you bite into a slice of bread/toast but I probably wouldn’t have this every day.  Loved the thick cut bacon and the plump bangers though. 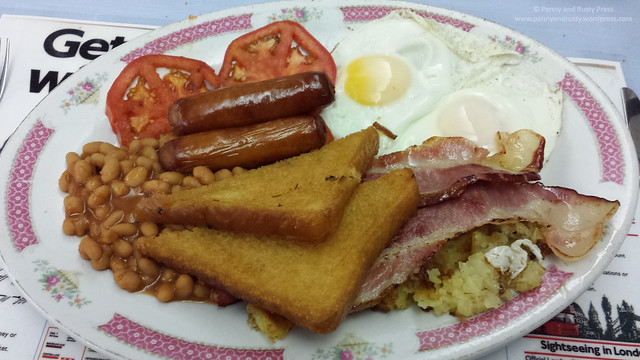 After hearing the waitress “scold” some other patrons for not finishing their food, we made sure to finish our plates and she gave us each a lollypop as a reward.