As a Canadian, I know this might sound sacrilegous, but I’m not a real fan of Tim Hortons.  Don’t get me wrong, I don’t mind the donut holes… especially if you can find a Tim Hortons outlet that gets the special varieties.  But I’m not a coffee drinker and their food has always been underwhelming to me.

Take, for example, their new Flatbread Breakfast Panini ($2.99) – which I ordered because they advertised that they were using new “thick cut” bacon.   Once I included a medium hot chocolate and hash browns, my meal came out to $5.07 before tax… not a very expensive breakfast I’ll have to admit but still overpriced for what I got. 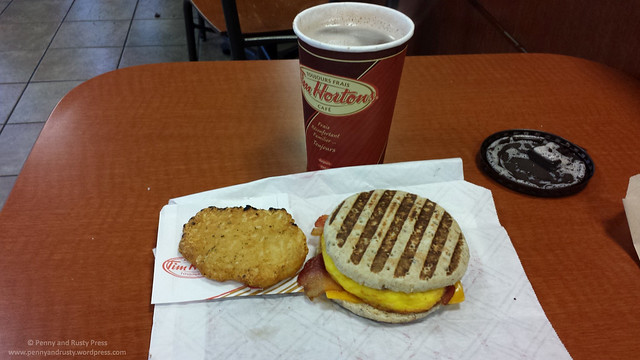 Let’s start off with the hash brown… or what I think should be more aptly named as a hockey puck.  It’s difficult to see in the picture above, but the flip side of the hash brown was burnt to a crisp.  Oddly enough, the hash brown wasn’t very hot or crispy.  It was more like eating a thin burnt hockey puck and I wound up having to dunk it in my hot chocolate.

The hot chocolate was actually not bad and was served piping hot.

Their flatbread breakfast panini was appropriately named given how thinly squished it was.  But their so-called “thick cut” bacon was nothing more than skinny cut bacon from what I could see and not crispy at all.  And while the “flatbread” bun had the characteristic grill marks that you would expect to see, the bun lacked the texture that you would expect from something that was grilled… it was almost like they painted on the grill marks.  Moreover, unlike the hot chocolate, their panini wasn’t hot – it was more luke warm.

I would much rather pay a couple of extra bucks for a better meal than try this again.