For some reason, there seems to be a decided lack of Filipino restaurants in Vancouver.  On the other hand, there’s more Japanese restaurants and Starbucks than you can shake a stick at.

It’s not due to a lack of people of Filipino origin since they represent 6% of the Vancouver population (based on 2011 Census data) compared with just 1.7% for people of Japanese origin.  I’m not sure what the answer is… perhaps it’s because the Filipino population doesn’t go out to eat at Filipino restaurants that often?

Pinpin is one of the popular Filipino restaurants and is located in the South Hill area of Vancouver on Fraser Street.  There’s plenty of free parking available in large parking lots just west of Fraser.

When we entered the restaurant, we noticed that they have a separate section next door for bigger parties (separated by a waiting area to the left).

Rice is a staple for most Asian meals and we had a large portion of Garlic Rice – there was a nice hit of garlic that had been stir-fried into the rice. 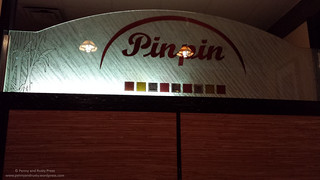 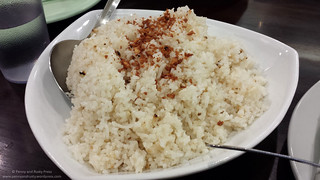 Based on the dishes ordered by other patrons, it seems like veggies aren’t ordered as much as the meat dishes.  Still, the String Beans and Squash in coconut milk was quite good, albeit with subtle flavours.

The Shrimp Balls tasted a bit like shrimp toast (a Chinese dim sum dish) but were encrusted by crispy bread crumbs.  Visually stunning and sure to be a favourite for kids and adults alike. 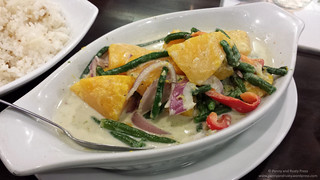 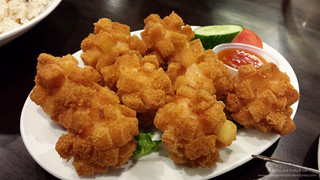 The Marinated Grilled Pork had an interesting texture from the grilling process – the meat having both bone-in pieces and some fatty bits as well.

The picture in the menu for the Fried Pork Hock didn’t look anything like this.  As it turns out, they break it apart for you.  It’s a big dish and the pieces of pork are super crispy and comes with a spicy soy dipping sauce.  Personally, I like to take a bit of the crispy skin and some of the meat together into one bite. 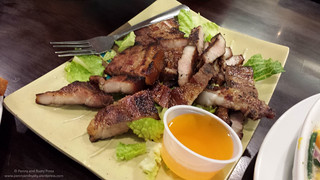 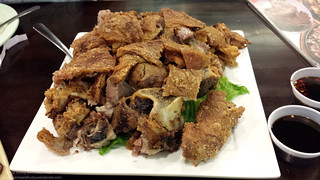 We finished off our meal with an order of Halo Halo – a concoction of things like jack fruit, beans, milk, green pandan plant jelly, and chewy cooked banana pieces underneath shaved ice and topped with purple yam ice cream.  It reminds me a bit of the shaved ice that we got in Hawaii.

We also had the Caramel Flan which kind of resembled crême caramel but with a thicker and denser texture. 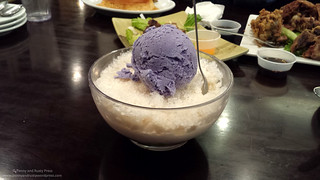 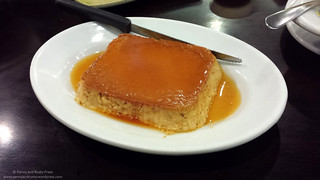