Black + Blue is one of the Glowbal Group of restaurants and located on the same block as fellow Global restaurant, Coast Restaurant.

We booked an early reservation for Dine Out this year and, as I heard, most of their reservations had filled up quickly for Dine Out. When we arrived, they made sure to let us know that we had a set time limit as our table was booked with another party at 7pm. I found all of this a bit interesting because I noticed that there were other tables available while we were there. I’m guessing that they were just limiting the number of reservations for Dine Out so they could accomodate walk-ins.

Black + Blue bills themselves as a classic steakhouse with a contemporary twist. It’s the kind of restaurant where the waiter will come and shake open your napkin and place it in your lap (Note: I’m not a big fan of the big, showy shaking of the napkin and think it would be better if they simply unfolded the napkin carefully). From my one visit I would have to say that it’s a good concept with spotty execution. Our server just didn’t seem to be completely on the ball: forgetting to put our drink order in, initially overcharging our appetizer order, water refills that were hit-and-miss. Things were all corrected when we mentioned them and might be expected if the restaurant was super busy but our section wasn’t even completely full while we were there.

The Dine Out menu included either Josper Grilled Vegetable Napoleon which is presented like a mille-feuille pastry with layers of bell peppers, zucchini, mushrooms and goat cheese or the Loaded Baked Potato Soup with double smoked bacon, chive crema, and cheddar. Both of these starters were very cheesy and I did enjoy how creamy and cheesy the soup was. 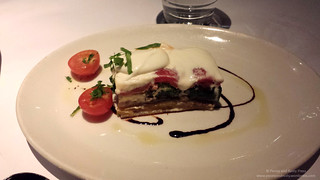 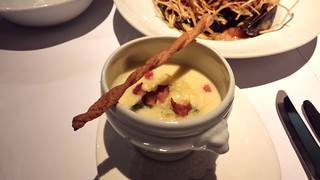 Along with our Dine Out menu, we ordered some Mussels which came served with a huge pile of crispy frites on top. For some inexplicable reason, our server took away our appetizer utentsils after we finished with them but never brought us utensils (or side plates) for the mussels. Fortunately, we did have our entrée forks but the mussels would have been easier to eat with a spoon so we could get some of the broth.  I also found the huge pile of matchstick fries made it difficult to get to the mussels.  Visually, it looks neat, but it wasn’t very practical… it would have been better if they included the fries on the side.  The mussels themselves (perhaps a dozen in the dish) were prepared well and were plump and juicy.

The Slow Cooked Guinness Braised Short Rib is one of the choices that you get for the entrée and is served with apple wood smoked cheddar spaetzle, and winter greens.  The short rib was fork-tender and you really didn’t need a knife to break it down.  I found the spaetzle to have a softer consistency than I expected but I enjoyed it nonetheless. 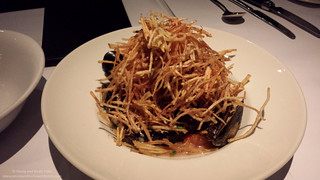 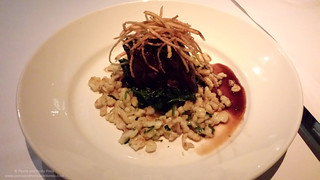 The 6 Pepper Crusted Beef Tenderloin was quite good and served with truffled mashed potatoes, seasonal vegetables, and red wine jus.  The tenderloin really lived up to its name and was (you guessed it) tender.

The Dine Out menu only came with one option for dessert (too bad because some of their other dessert items looked interesting)… the B&B Carrot Cake served with a baby coconut & ginger macaron, cream cheese, berries, and a candied fruit slice (the menu said candied carrot but it tasted more like candied ginger).  I did really enjoy the dessert and it had a beautiful presentation. 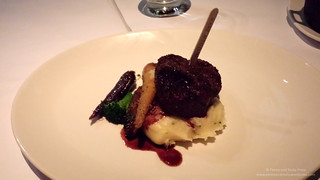 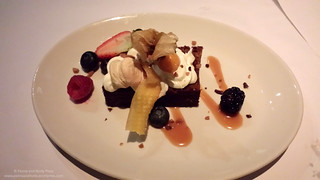 The food here’s not bad and the Dine Out menu was a fair deal but service was a bit iffy.  I also found it to be strange that they used paper tablecloths in a restaurant that seems like it should be more up-scale.