This year, Dine Out Vancouver coincided with Lobster Fest at the Boathouse restaurants.  We’ve been to the New West location on many occasions (with mixed results).  It does seem to be a popular choice because the restaurant was busy on the night we visited.

The $38 Dine Out menu included 5 choices for appetizers but we decided to stick with the West Coast Seafood Chowder and the Lobster Bisque.  Service this night was markedly slow with our appetizers taking 45 minutes before they appeared.  In the past, I remember that they used to pour the bisque into the bowl tableside but this time it was just delivered already in the bowl.  I guess they were too busy for the extra flourish.  Still, I think the soup was probably my favourite part of the meal. 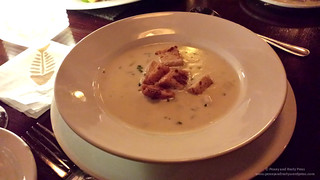 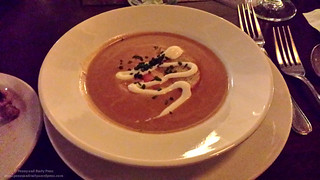 For the main course, we chose the Fire-Grilled Sirloin topped with Lobster Thermidor and the Miso Crusted Wild Halibut with black pepper sauce.  Again, these dishes took awhile to come out… probably based on how busy they were.

The steak, although cooked to medium-rare was a bit chewy and tough to cut… probably a bad cut of beef I think.  “Sirloins” are a multi-muscle meat cut and tend to vary a lot in quality depending upon which part of the sirloin it comes from.

The halibut fillet was a generous portion with the firm and meaty flakes covered gently in a miso crust and served atop wild rice and broccolini.  I did feel like the sauce was a bit too salty and didn’t use much of it. 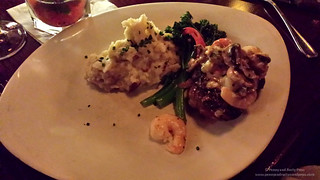 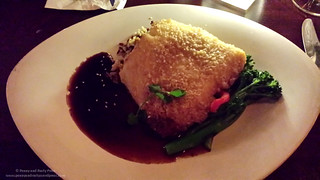 For dessert, we opted for the Crème Brûlée and the Mocha Mud Pie.  Neither dessert really did it for me but we were pretty full at the end of our meal.  I thought the vanilla crème brûlée (the Dine Out menu said “seasonal crème brûlée”… since when is “vanilla” seasonal?) had a denser custard than I would have preferred. 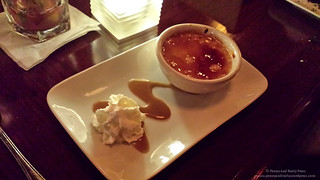 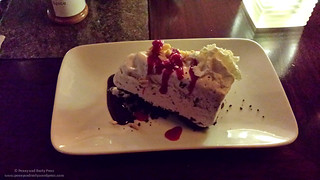 Service wasn’t too bad despite the food being a bit slow to come out (although they did get my appetizer order wrong initially).  Pricewise, the Dine Out menu is fair when you compare it to their regular menu (you basically get a free dessert).

Check out our post on Dine Out Vancouver 2012 at the Kitsilano Boathouse.

Update: Feb 8, 2014
Lobster Fest was going on during Dine Out but we didn’t really get to try out all of their lobster inspired dishes. We came back here in early February after Dine Out ended and it was much quieter.

I love mac and cheese but I’ve got particular preferences and I’ve often found that I don’t enjoy most mac and cheese dishes at restaurants. But, looking at the Lobster Fest menu, I knew that I had to try their Lobster Mac & Cheese. Their menu described it as “lobster meat, brie cream sauce, smoked bacon, topped with a 4 oz butter roasted tail”. It sounded good but what arrived wasn’t very inspiring. 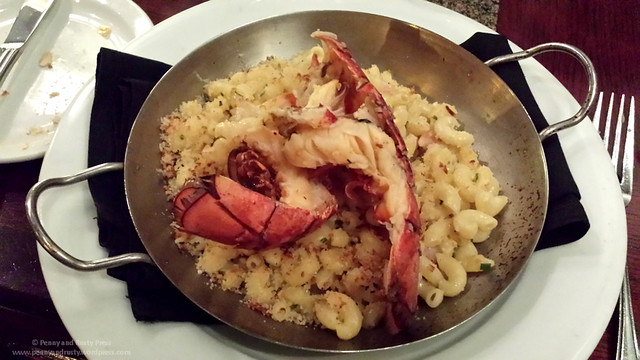 Yes, there was a lobster tail on top and I admit that it was a fair size. But based on the menu description, I thought there would be additional lobster meat in the mac and cheese. I was especially expecting to see the smoked bacon but was disappointed to barely fine any (there were a few tiny slivers of thin bacon bits but that was it). The brie cream sauce wasn’t enough to coat the macaroni resulting in a drier pasta dish. For $24.99, it really wasn’t worth it and the shallow pan that it was served in left me unsatisfied. If you’re looking for something on their Lobster Fest menu, skip the mac and cheese and try the Cioppino ($32.99) instead.