Kilala Sushi Bar is a bit of a hidden restaurant in North Burnaby because their name “Kilala” isn’t prominent on the large sign outside the restaurant.  Instead, their sign has “Sushi Take Out/Eat In” in large print with “Sushi Bar Kilala” in much smaller print below.

This “mom and pop shop” specializes mainly in sushi but they do have a few cooked options as well.  Just don’t expect to get a full assortment of Japanese dishes here.

We started with a bowl of Miso Soup ($1.25) served piping hot.  The Spinach Gomaae ($3.50) was oddly salty – perhaps from soy sauce.  I prefer gomaae that has more of a spinach flavour to it.

We ordered Wild Salmon Sashimi ($12) which was quite fresh, clean, and firm in texture.  Wild salmon sashimi has a texture that’s completely different than farmed salmon – you should definitely give it a try sometime. 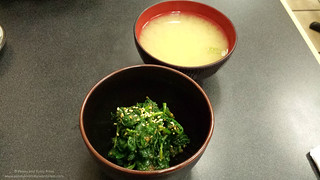 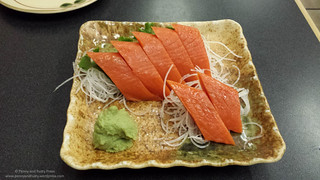 For our sushi roll, we opted to order 1/2 a Kilala House Roll ($5.75).  It’s difficult to tell from the picture because there’s no frame of reference but… OMG!  This was a huge roll!  The only downside is that it makes it almost impossible to eat without making a mess.

We did wind up ordering some hot food and went with the Chicken Teriyaki Don ($7.25) which came with skinless, boneless chicken pieces, carrots, and broccoli over rice.  It looks a bit plain but the rice had a very good sauce mixed into it which made it very tasty. 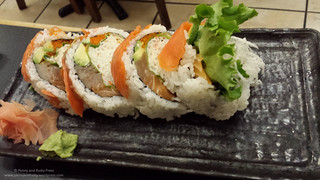 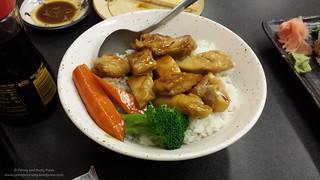 Aburi sushi isn’t as common as other sushi types in the Lower Mainland but I’m finding that I really enjoy it (see our post on Minami in Yaletown).  We ordered the Unagi Battera ($12.50) which is a pressed sushi with buttery unagi that’s seared on the top.  I think there might have also been some egg (tamago) underneath the eel.  This had really good flavour from the grilled unagi and I really enjoyed the texture – I could eat this all day long. 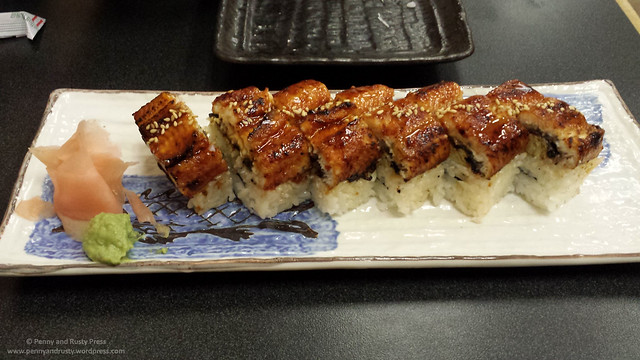 The restaurant is small with only 6 small tables of 2 as well as the area at the sushi bar but it seems larger than it is because of the large wall-sized mirror in the back of the restaurant.