Alaskan King Crab.  Those three words stir the imagination of many Asian diners… especially during the month of March when these ginormous crustaceans are “in season”.  Unfortunately, with the growing economy of China, most of these tasty crabs are diverted to the Asian market to satisfy the insatiable hunger of the Chinese middle class.

Golden Swan has a $398 set menu which features Alaskan King Crab served three ways and offers crabs that are 8 lbs in the meal.  If the crab is larger than 8 lbs, you pay the difference, $19.99 per lb.  They told us that our crab was 9 lbs (although I thought it looked a bit smaller).

The first dish in the set menu was soup with shredded chicken (which was pretty good) and then followed by Peking Duck.  The shrimp chips were soggy from sitting in oil, hence, lacked a noticeable crunch when you bit in them. 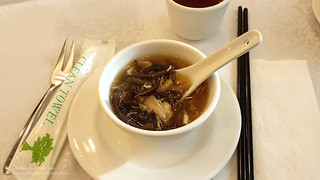 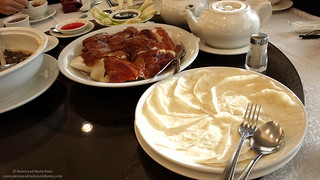 We had Alaskan King Crab at Golden Swan last year and I remember it not being that good.  This year was much better.  Perhaps they have a different chef.  The steamed legs come pre-sliced and cooked with plenty of garlic.  The knuckles come prepared deep-fried, jiu yim style with spicy seasoning. 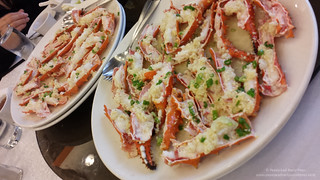 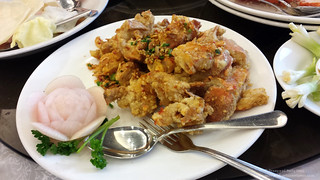 Instead of duck lettuce wrap, our second Peking Duck dish came with stir-fried duck meat and veggies.  It’s a nice change of pace from lettuce wrap and less messy to eat.

A staple of many Chinese set menus is the Crispy Skin Chicken.  I don’t have anything against this dish other than the fact that it’s cut up in the same manner that you get when you go to a Chinese butcher shop.  You invariably get the huge, thick pieces of meaty chicken blocks that no one wants to eat. 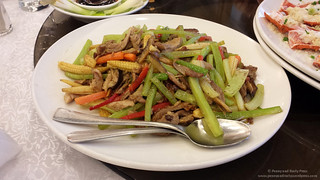 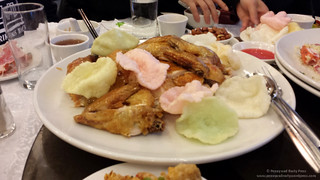 The last of the Alaskan King Crab dishes to arrive was the Portuguese Rice served in the carapace with pieces of king crab meat and shrimp.  I thought the rice was a bit too dry and there didn’t seem to be enough sauce to mix up with the rice. 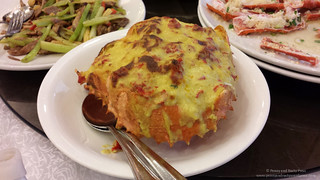 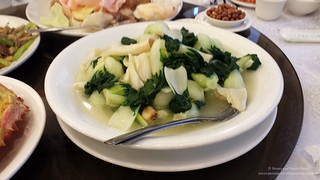 Last up was the Deep Fried Sole served with Broccoli.  The fish was spicy with the same seasoning as the jiu yim knuckles.

The Baked Tapioca Pudding was an extra $10 and needed to be ordered in advance.  Unlike some varieties, this didn’t come with red bean. 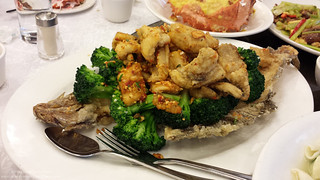 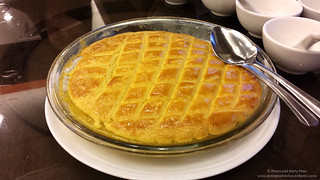 The restaurant was packed with tables ordering Alaskan King Crab.  If you’re looking to try Alaskan King Crab, now’s the time.  Pretty soon the prices will skyrocket.  But then, we still have Spot Prawn season to look forward to. 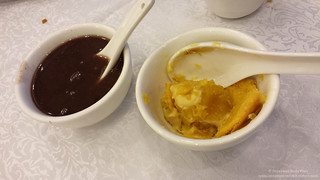