Union Jack Public House is located in the old Moonrakers Neighbourhood Pub location.  I’ve never been to Moonrakers before but it looks like they did a pretty good job on the renos… plenty of dark wooden tables and large tvs on the walls.

This pub seems to attract an older crowd (but I suppose that’s to be expected based on the neighbourhood).

I ordered a Mighty Leaf Green Tea Tropical ($3.09) to start out my lunch and then opted for Jack’s Signature Stuffed Yorkies ($13) with roast beef, yukon gold mashed potato, and housemade beef gravy.

The big puff pastry was definitely visually stunning.  Inside, the pastry was light and airy but I found that the outside was a little overcooked (almost burnt in some spots) which distracted from the rest of the dish.  The slices of roast beef were standard with some slices that were a bit dry.  Fortunately, the gravy did make up for some of the shortcomings.

With the added mashed potatoes and the ample amount of sliced beef, this is a really filling meal for lunch.  Not the best Yorkshire Pudding I’ve had – it would have been much better if the outside of the yorkie wasn’t burnt and if it came with some horseradish for the beef.  I also found it strange that they called this dish “Stuffed Yorkies” implying that it would be multiple Yorkshire Puddings instead of just one huge Yorkshire Pudding. 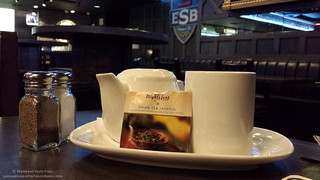 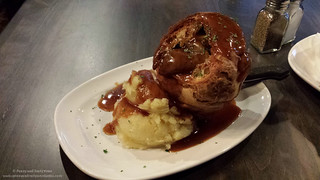 Service was pretty good – they refilled my tea without any prompting and seemed friendly.  If you don’t mind the older clientelle and the 80’s music playing in the background (which I actually enjoyed), this might be an okay spot to grab a bite.  Just don’t expect too much from the food.