Who knew that biscuits and gravy was so popular in Oregon? It seemed like everywhere we went, there was a restaurant that said they served the best biscuits and gravy. Biscuits Cafe has been spreading their wares around Oregon since 1998 and has a number of locations now.

Sometimes, the most difficult part of breakfast is trying to decide what to eat… I suppose that’s how the Keeping it Simple option (combine any 3 items for $7.99) came about . Although, I’m not sure how simple it really is… you still have to choose from a rather long list of options. In the picture below is French toast (which was good), the five berry mix (which wasn’t great), and two sausage links. 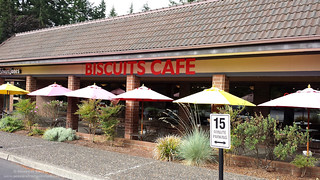 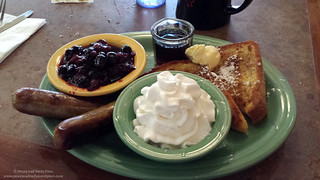 I picked the Biscuits and Gravy Combo ($8.49) which came with two eggs, bacon (choice of bacon, ham or sausage) and their trademark biscuits and gravy.  The bacon was quite good… 3 large rashers of crispy pork just the way I like it and the eggs had a nice runny yolk.  The fluffy biscuit was perfectly cooked and smothered in country-style gravy. 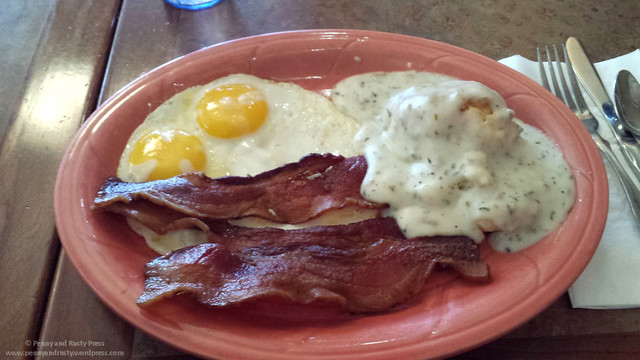 While their tag line is “We don’t serve fast food… we serve fresh food as fast as we can!”, I found that it took a bit long for the food to come out.  Still, I wouldn’t hesitate to have the biscuits and gravy here again.