New Lakeview Seafood and Wonton Restaurant is a busy Chinese restaurant located in New Westminster. I’ve often driven by it without even knowing it was there.

I came by for lunch on a weekday and it was packed… most likely due to their lunch specials which run from 11am to 3pm. I asked one of the waitresses and she said that it’s usually busy during the noon hour rush but it’s not so bad an hour earlier or later.

How busy was it? When I arrived, all of the tables were taken except for a large 10-seat family table. They asked me if I minded sharing the table with others and I wasn’t too bothered by it. Sure enough, as soon as I sat down and another small party came in, they sat them at the same large table as me. As some smaller tables cleared up, they eventually moved me to my own small table. It kind of reminded me of that Diner Dash video game where you try and seat people wherever you can.

On my first visit, I ordered the Curry Beef Brisket on Rice ($7.95). This was a generous portion size with tender beef brisket, onions and green peppers. The thick curry sauce was pretty good and went well with the rice.

Speaking of generous servings… I ordered the Hot and Sour Soup ($1.95) and was surprised at how big of a bowl it was. The thick soup had shredded chicken and the characteristic tangy/spicy flavour to it. 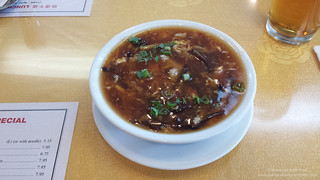 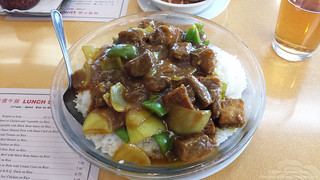 I decided to come back again for lunch to try out their Crispy Chicken Chow Mein ($8.25). Sure enough, the noodles were super crispy and were coated with a thick sauce and crunchy bean sprouts – each bite was a mixture of crunchy and chewy. I don’t think this was on their lunch special menu – it was from their regular menu but the price was pretty good given the size of the dish. 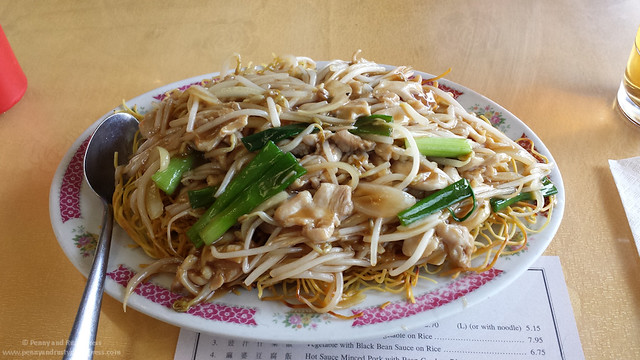 In many ways, this place reminds me of those small Chinese restaurants that you used to find in Chinatown many years ago… complete with the hot tea served in tall glasses. They don’t apparently do dim sum but the dishes that I tried were pretty solid.