If you live in Vancouver, chances are, you’ve tried pho before, driven by a hole-in-the-wall pho joint, or have argued with someone on the correct pronunciation of “pho”.

Whether you pronounce it as “fo” or “fuh”, however, the large number of pho places in the Lower Mainland is a relatively new phenomenon that only truly appeared after the influx of Vietnamese immigration in the mid-70’s and 80’s.

Kim Anh is a prototypical Vietnamese-Canadian cafe in New Westminster serving up both Vietnamese cuisine and western foods (such as burgers, steaks, and omelettes).

On my visit, I tried the Pho Tai Bo Vien ($6.99) – which contains rare beef and beef balls with rice noodles in soup. I was hoping for the rare beef to actually be rare… but as you can see in the picture below, the beef had already cooked up in the soup before it got to my table. There wasn’t tons of beef (maybe about 5 slices) but the flavour of the broth was okay, though on the lighter side. On the side, they brought out some crunchy sprouts and a lemon wedge – but no Thai basil. 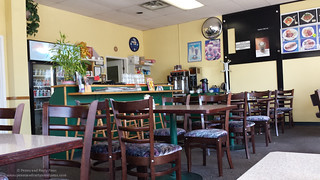 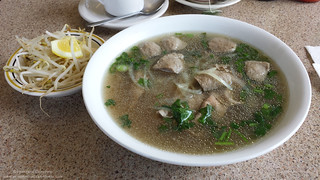