I’ve been looking for a reason to head downtown and visit Miku ever since we tried Minami in Yaletown. Previously located on West Hastings in Coal Harbour, Miku moved into the old Aqua Riva location next to Canada Place. After having a long couple of months at work, I decided to take half a day off and treat myself to some tasty Japanese cuisine.

The Miku Zen ($28) seemed like the perfect choice… comprised of four seasonal items from the kitchen and 5 pieces of sushi along with miso soup. From my seat, I was able to see the chefs plate all of the dishes. 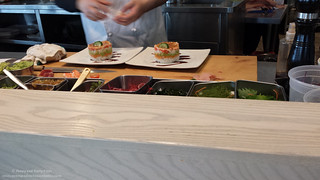 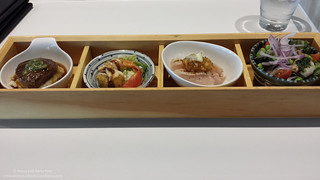 My Miku Zen arrived in a wooden box and included chopstick-tender beef served on top of mashed potatoes with a wasabi kick. It almost seems inconceivable that beef could be so tender that you could easily break it apart with chopsticks but they’ve done it here.

Next up has got to be the best shrimp tempura that I’ve ever had. But to call it a shrimp tempura would be like calling a ninja just some dude in black pjs. No, the Ebi Fritter (as Miku calls it) is a large tiger prawn that’s been battered up and served with a sweet chili aioli sauce.

The rest of the Miku Zen included Aburi Tuna – albacore tuna that’s been slightly flame seared, and a Shrimp Salad – made up with edamame beans, tomatoes, and red onions with a lightly tart dressing. 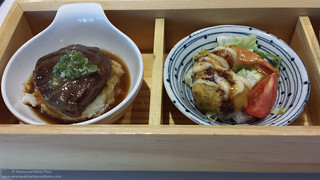 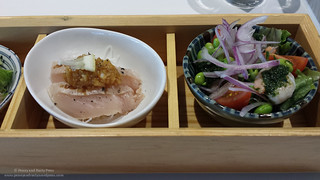 After I polished off the Miku Zen, my miso soup with enoki mushrooms arrived .. as did my sushi. Each  piece of sushi was paired with a unique sauce to emphasize the flavour. From left to right: albacore tuna nigiri, ebi nigiri, something which the server said was tuna tartare topped with tobiko but the roll didn’t seem like tuna, along with 2 pieces of their famous sockeye salmon aburi sushi. 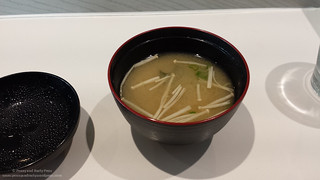 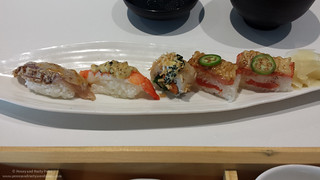 The food here was quite good – I know it’s expensive, but it was worth it.

I finished my meal with the Passion Fruit Praline Dome ($11) with passion fruit cream, praline mousse, and mango compote on a chocolate arare wafer and served with salted hazelnut ice cream.  The dome was practically shimmering in the light and also came with caramelized banana slices and pineapple chunks. 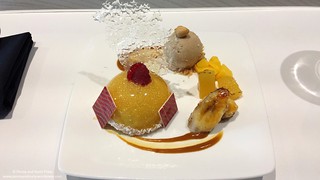 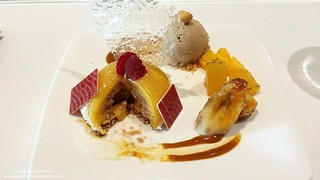 As I was seated at the end of the sushi bar, all of the plated food waiting to be picked up was within inches of me and I was sincerely tempted to just reach over and try every one. It was also interesting to see how they put together their famous pressed sushi – it all seemed so easy but I’m sure it takes a lot of practice to perfect.