If you’ve driven along Edmonds, you’ll probably recall seeing the iconic neon sign that currently points to the Lost in the 50’s Drive-in. But the current drive-in wasn’t always underneath the heritage sign… the 20 ft tall curved arrow used to point to the Tomahawk Drive-in that occupied the spot in 1961.

Over time, it was known as Lindy’s Burger and in 1990, it became Lost in the 50’s Drive-in. Interestingly enough, the City of Burnaby purchased the sign and paid to restore it while the property lessee is responsible for the on-going electricity bill.

On my visit for lunch, I ordered the London’s Secret combo ($7.99 for the 6oz and an additional $2.99 for the fries and 50’s lemonade). I opted for the whole wheat bun which was a bit of a fail – the thin bun broke apart almost as soon as I picked it up and wasn’t up to containing the burger fixins. The London’s Secret had a sirloin patty that was topped with bacon, cheese and sauteed onnions that started out good but the beef was dry in parts.

The fries were on the limp side and not very crispy but they were still pretty good. I overheard one of the other patrons order their fries extra crispy so maybe that’s a better option. The food here is cooked to order, so be prepared to wait a bit for your burger order. 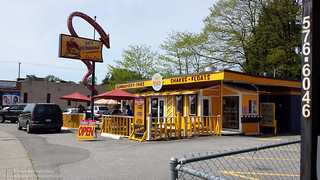 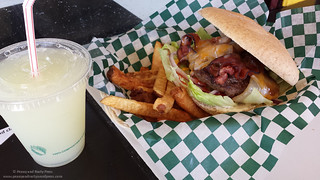 Was it the best burger? No, just okay – and messy to eat with that bun. But they do have some other items that sound interesting.