To some people, the style of barbecue that you prefer can be as contentious as which Hogwarts House you align with.

Memphis-style barbecue is characterized by the slow cooking method over low heat (such as smoking over hardwood).

On our visit to Memphis Blues Barbeque House on West Broadway, we tried their Rib Ends Meal ($18.95). All of their meals are served with corn bread, BBQ pit beans, slaw and choice of potato salad or fries (we picked the potato salad). The meat looked a bit like char siu and was rather uninspiring. I’ve heard that some people consider these as delicacies but I don’t see what the fuss is all about. On the good side, the slaw and potato salad were okay.

We also ordered the deep-fried Oysters ($8.85) which were coated with a cornmeal breading (similar to fried catfish). The oysters started out pretty good and had a cut crunchy exterior. However, the oysters were really oily and a large puddle of oil sat in the bottom of the dish which soaked through the paper and into the oysters. This caused the remaining oysters to lose some of the crispness. Also, I found that the nice crunchy exterior that I enjoyed in the beginning became a bit distracting after a while. 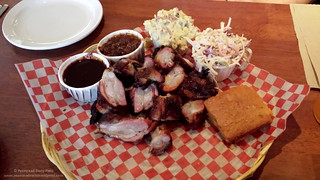 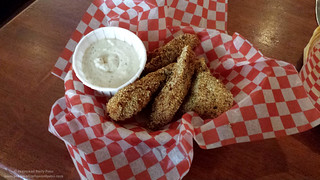 This location was busy during our lunch-time visit. You have to line up to order and they seem to be a bit slow to take your order. Perhaps some of their other dishes are better.