Tacofino Commissary is a popular restaurant in the East Village area of Vancouver. When I visited in late August, the place was packed but I managed to bypass the lineup and snag the last single seat at the bar.

The seats at the bar aren’t exactly comfortable as they appear to be large wooden stumps and quite difficult to move. If sitting at the wooden bar isn’t your thing, there’s also large communal tables in the middle of the restaurant.

I started my meal with a Mandarin Jarritos. It took a while for the food to come out due to how busy it was but, eventually, my tacos showed up. They cost $6 each or 2 for $10.

The Fish Taco was a reasonable size and came served with battered ling cod, cabbage, chipotle mayo, and salsa fresca. Meanwhile the Pork Jowl was served with cabbage, crispy fried shallots, pineapple, and sriracha sauce served on two tortillas. I found that the sweet and sour flavour overpowered the pork. 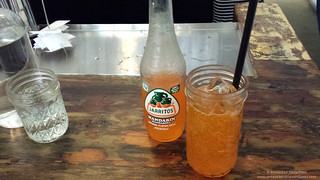 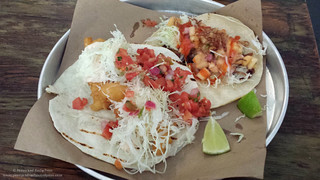 Service was fairly friendly despite it being busy. Next time, I wanna try the churros.