There was a time when I didn’t really mind the Sui Sha Ya that occupied the location next to the Bay in Metrotown. I remember actually having a really good unagi congee there once. Of course, over time, like most AYCE places, quality went down and we stopped going there. Recently, the tired and dated Sui Shaw Ya has been replaced by a udon bar.

It wouldn’t be a visit to an udon bar without ordering udon so we decided to try the Niku Udon ($8) with sukiyaki beef, onions, enoki mushrooms, and baby bok choy. On the good side, the beef was tender and the noodles were okay (although a bit firmer than I prefer), but the broth had very little flavour and there really wasn’t a lot of beef in the bowl. We added the Onsen Tamago ($1.80) which had a pleasantly soft and runny yolk.

I actually liked the Chicken Karaage ($5) – it was a rather small portion but it was only $5. The boneless chicken had a light and crispy exterior but was still moist on the inside. 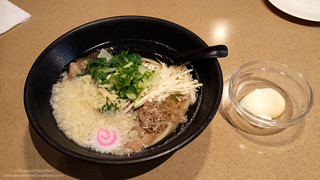 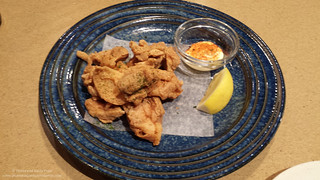 The Mango Sashimi Salad ($10.50) was rather disappointing. The biggest problem was that the mango wasn’t fully ripe. Plus, they really need to use a different dressing with this salad.

I was a bit sadden to find that the Dragon Roll ($8) didn’t have a face to it. The tempura on the inside gave it a nice crisp crunch but I found that the roll was on the small side and felt more like a baby dragon roll. 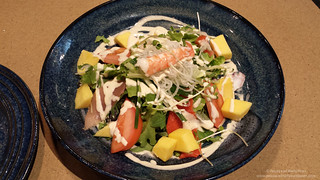 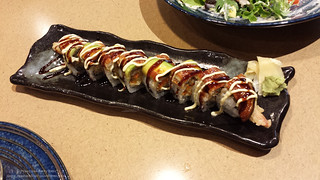 Over all, not bad for mall food (I know that’s not saying a lot) but the dishes are hit-or-miss. Plus they use mayo on way too many of their dishes. Just don’t go in expecting a really flavourful udon here.

We decided to come back for a revisit to check out some of their other menu items. The Gyu Donburi ($8.30) came out first and was made up of simmered beef and onions on rice with seaweed and red ginger strips as well as an Onsen Tamago. The egg yolk was partially soft but could have been a bit more runny. Otherwise, the thinly sliced beef and onions was okay but the whole dish seemed to be missing something.

Oshi Sushi seems to be all the rage lately in Vancouver with Miku and Minami setting the standard. We tried Sekai’s Oshizushi Atlantic Salmon ($7.90) which is significantly cheaper than Miku, Minami, or even Kishimoto. The salmon was seared and topped with a jalepeño slice which provided a healthy kick. In the middle of the roll, they only had a thin layer of pickled ginger and it seemed like the pressed-sushi had a bit too much rice. 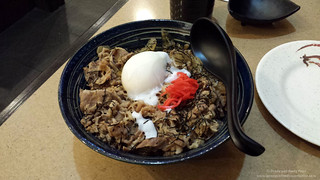 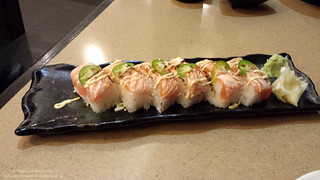 The Chicken Yakitori ($4) was slathered in a sweet teriyaki sauce and reminded us of something that you’d find at M & M Meats. We rounded out our meal with the pan-fried pork Gyoza ($4.75) which actually wasn’t too bad. 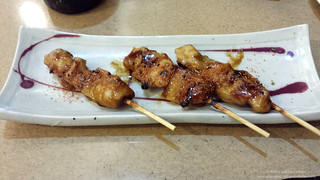 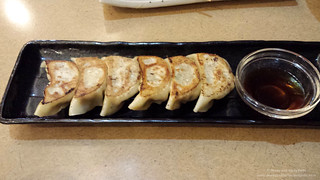 So, as I mentioned, dishes are a bit hit-and-miss but not too bad for mall food. For an udon place, they really need to offer more udon options.