Sushi Bella recently opened their 4th location in a small location on Kingsway just east of Metrotown. While it’s true that the Lower Mainland needs another Japanese restaurant like we need another rainy winter day, I was pleasantly surprised by my visit here.

The interior of this restaurant seemed a bit dim but there was some light coming in from the windows. There’s plenty of wood tones here to give it a warm and earthy feel. 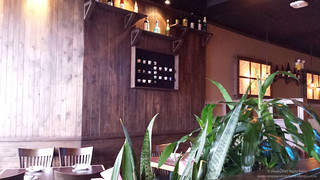 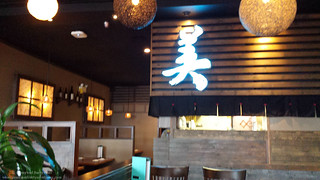 While I was interested in ordering their Hawaiian Poke to see how it compared to the one that we had at Nico’s at Pier 38 in Honolulu, I decided instead to order the Tuna and Salmon Sashimi ($10 + $1 extra to substitute for Wild Sockeye Salmon). Their sashimi was actually quite good. The tuna had very generously cut pieces of tuna and was served at the appropriate temperature. While the sockeye salmon wasn’t as thick as the tuna, the cuts were still a good size and both the salmon and tuna tasted fresh. I also appreciated the pretty decorative touches that they added to the dish.

They also brought me out a piping hot bowl of miso soup which really hit the spot on the cold January day. 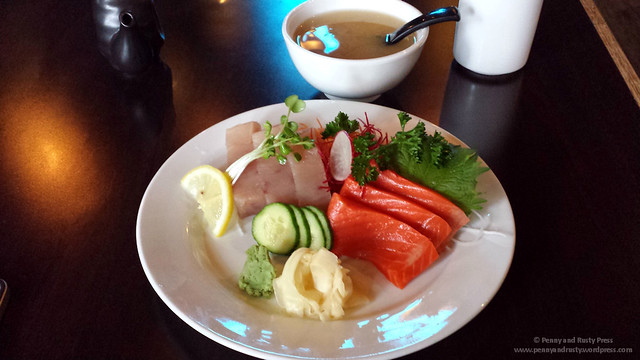 The Ginza Karaage Bowl ($8 lunch special) is served in a large bowl and comes with a mountain of deep-fried boneless chicken that’s coated with a slightly sweet sauce atop kizami nori rice (shredded nori seaweed). Due to the sauce, the deep-fried chicken doesn’t retain it’s crispy exterior. However, I didn’t mind the sauce and it mixed well with the rice. The meat was tender and juicy so I was quite happy with this dish. 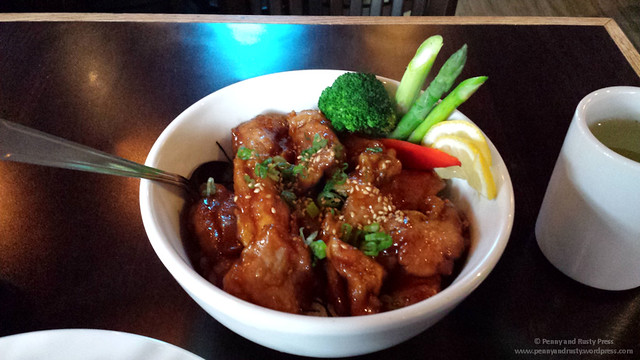 As they’ve just recently opened, it was completely empty during my lunch visit. But I did get 10% off due to their Grand Opening special (which is supposed to go on through February). Some of the menu items seems to have a bit of a fusion twist to them but I wouldn’t mind trying out a few of their other dishes.