There was a time when the words “dim sum” meant heading down to Chinatown… places like Ming’s in the heart of Chinatown would have lineups that stretched down their staircase (when I was a kid, I thought their staircase was enormous). After a while, the Chinese restaurants spread out (with many heading to Richmond).

Pink Pearl is one of the restaurants that seems to have survived on the outskirts of Chinatown for years. True, they were closed for an extended period of time (about 2 years I believe) due to a fire, but they’ve since reopened a couple of years ago. We came by for a visit on a Sunday morning expecting it to be busier but the dim sum crowd didn’t start to really arrive until around 11:30am.

The restaurant itself, like the parking lot surrounding the building, is fairly large. Pink Pearl is still one of the restaurants that have limited push cart service, but they also have an order sheet so you can order exactly what you’re looking for instead of waiting for a cart to come around. The first dish is their large shrimp with scallop dumpling served in the characteristic bamboo steamer. 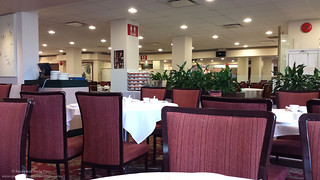 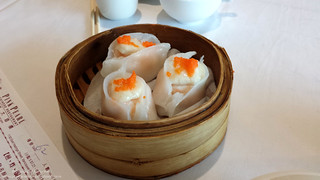 The Steamed Chicken Feet is a dish that can test the bounds of the uninitiated non-Chinese diner. In truth, there’s really no meat on the chicken feet… you just suck off the tender skin, cartilage, and sauce off of the bones. I know it doesn’t sound very appetizing but it’s worth trying at least once.

Siu Mai is another classic dim sum dish. These dumplings made of minced pork and shrimp are garnished with orange roe on top. 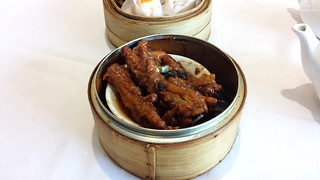 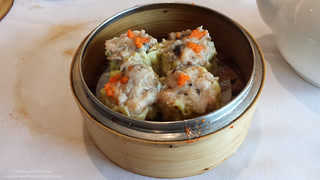 I was a bit disappointed with the Deep Fried Taro Dumplings as they were too dry. I know taro is generally dry but these were overly so.

Deep Fried Wontons is always a bit of a hit-or-miss dish when we order them because some restaurants prepare them differently. I did enjoy Pink Pearl’s variety as the wontons were crispy and not overly thick and the filling (while not huge) was appropriately sized. 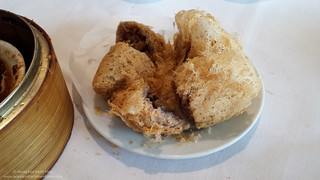 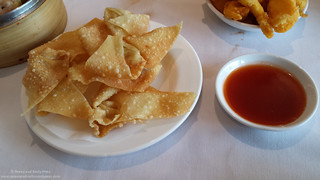 There was just something a bit off with the size of the Squid. Yes, fried squid is usually a bit chewy but I think these pieces were cut too large which resulting in each piece being considerably more chewy and requiring more effort to eat.

The Pan-Fried Daikon Cakes were not bad and is usually a safe dish if you’re trying to introduce dim sum to non-Asians. 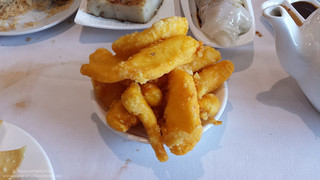 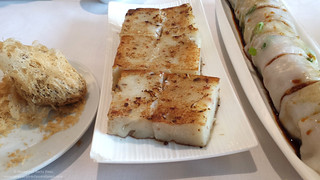 Lastly, we have the Chinese Donut Rice Roll and Spareribs dishes. The Chinese Donut (something that you generally see eaten with congee) is wrapped up in silky smooth rice rolls and served with hoisin and peanut sauce. 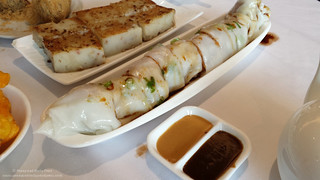 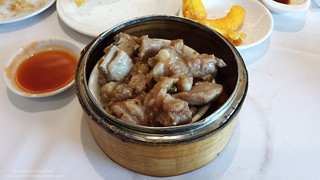 Are there better dim sum places in the Lower Mainland? Yes, probably. But it’s a bit nostalgic to come back and eat here.